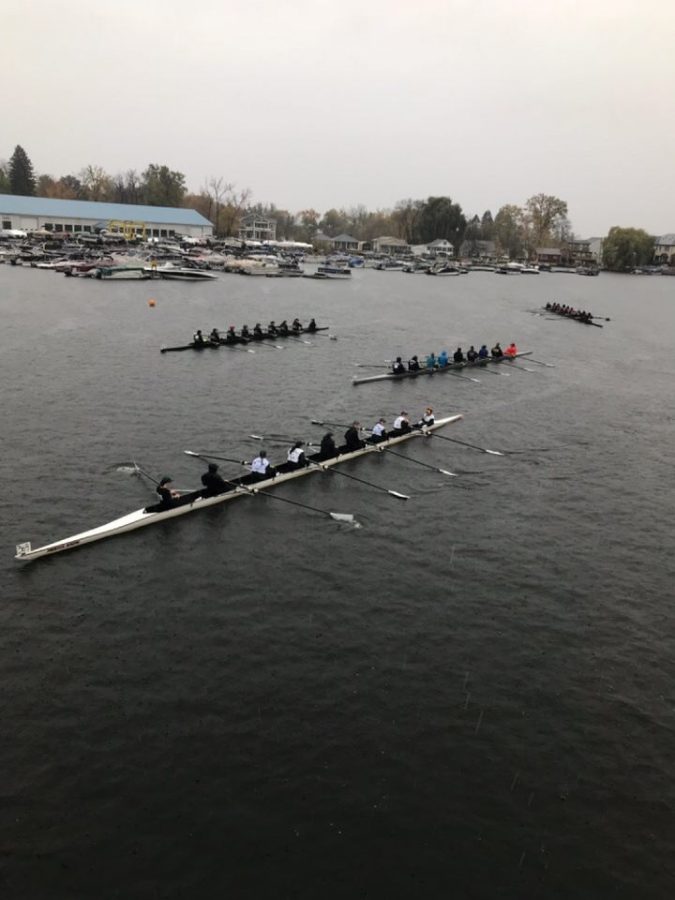 This year’s two day Head of the First Regatta was more challenging than ever this year due to the extreme environmental factors. The annual Head of the Fish Regatta is hosted by the Saratoga Rowing Association out in Saratoga Springs. Multiple teams were at the Regatta as it is one of the most popular ones in the northeast region. Both teams placed in the 15-minute range.

The regatta started off “bone-chilling” and “started with rain that then turned freezing rain and hail” according to senior Steven Serafen. Senior Nick Lutz was one of the individual’s that suffered from hypothermia due to the extreme sudden cold.

According to senior Reilly Callahan, “the Women’s Novice team were unable to row due to weather but they were our saviors! They de-rigged boats while Varsity was shivering and trying to get warm.”

Many other teams went through similar issues due to the cold.

As part of the fall training, there are group training sessions on Onondaga Lake on Tuesday, Thursday, and Saturday. Intense training sessions leading up to the Head of the Fish Regatta on October 27th this year.

Spring semester is primarily training using the rowing machine. This allows the crew teams to work on posture, cardio, and keeping a consistent pace. According to Serafen, the primary focus areas are “70% legs, 20% back and abs, and 10% arms.”

In previous years the men’s team was larger allowing Le Moyne to field an 8 boat but this year due to less interest, “there were fewer returning men’s athletes this year,” stated Lutz.

When asked about what makes Le Moyne Club Crew special, Callahan stated, “the thing that makes crew special is that everyone has to work with everyone else. It’s the ultimate team sport with personal attention to form and power/drive.”

Lutz said “It’s a great group environment in which you really need to mesh with your teammates. If someone is off on timing, it throws everything off. Training really helps solidify this team mentality and getting us ready for events like this.”

Serafen stated that “the team is really close-knit, it’s a lot like a family due to the nature of the sport. You cannot row a full boat by yourself, you have to work really closely with one another.”

If you are interested in joining the Le Moyne Club Crew team, email one of the coaches,  Andrew Grant at [email protected] or reach out to any member of the crew team for more info.