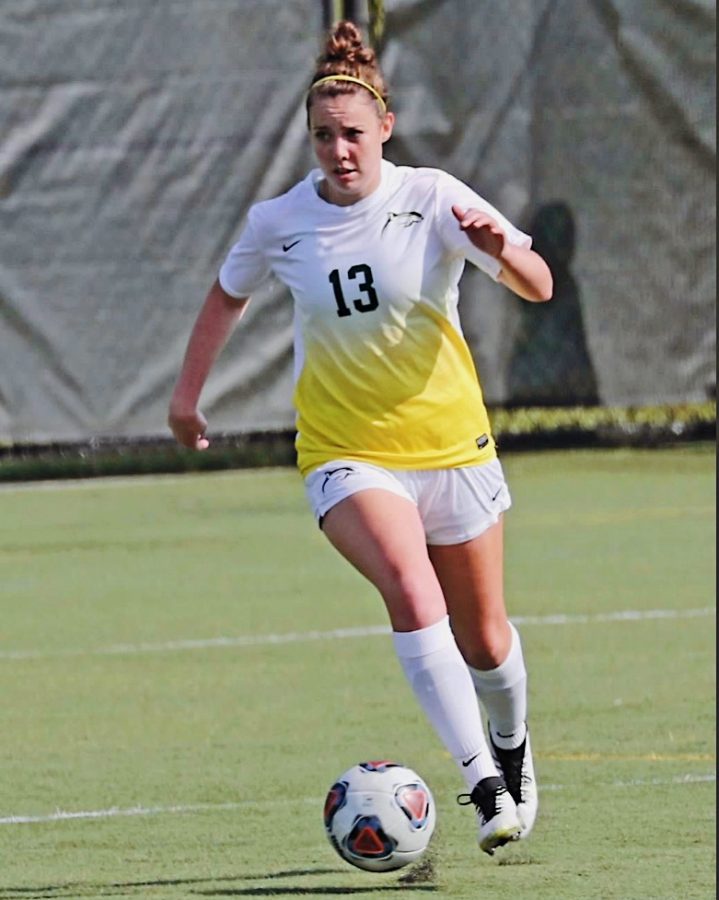 There’s 10 minutes left in the soccer game. The scoreboard reads 1-1. A defender sweeps the feet of Ava Bligh and the referee blows the deafening whistle. Bligh lines up for a free kick, just outside of the half line. She approximates this to be a 50 yard kick to edge the ball near the goal. The opposing goal keeper eyes the forwards, waiting for a lofted ball outside the box. Bligh lines up, sizes up the goal, takes five steps out and one step to the left. She charges the ball, sweeping her leg through the grass. The ball catapults through the netting. The keeper doesn’t even jump. The scoreboard reads 2-1. The final whistle blows.

Ava Bligh, a graduating senior on the Women’s Soccer team, recounts this memory from her earlier years. Bligh, like many other seniors this year, recently received the heartbreaking news that she will no longer be a collegiate athlete due to the postponement of the fall season. COVID-19 has affected everything in our daily lives, for Bligh, this includes soccer.

“I had a feeling when we went home in the spring. I was saying to my parents, ‘if the season doesn’t happen, life goes on.’ I would say it, and I would continue to just say it just randomly trying to convince myself. Once Coach Carrie told us, I was in complete denial…”

Bligh, like many other athletes in her position, struggles with coming to terms with the end of an era in her life. Bligh began playing soccer when she was 3 years old. Soccer has been a part of her life for as long as she can remember. She doesn’t know how to live life without it.

“My mom asked if I was okay, and she is never usually worried about me. That was something I remember. We were in my kitchen, and I came home. She asked me ‘are you okay Ava,’ and I literally just started bawling, I told her ‘I don’t have a purpose in life, I don’t know who I am anymore. All my friends are athletes, I feel like I won’t fit in.’”

“It was 18 years of my life, and it was my identity. That’s what I was. I went to high school, I played soccer, that was my thing, everyone knew that… I don’t really know who I am outside of soccer and I guess I’m still trying to figure that out right now. I don’t know what my purpose is. It’s always been in the back of my mind just get better at soccer, always get the touches in, you need to work out… Now that I don’t have that, it’s very confusing… I need to figure that out, what my next sense of purpose is in my life.”

Bligh is now beginning to throw herself into other parts of her life that were neglected. Soccer took up her entire life, whether it was her time, headspace, or body. Without soccer, Bligh explains what it’s like to continue her life with the largest part of it missing.

“Once we found out about soccer being cancelled, I needed to take a break from working out, and clear my head. It was getting very confusing, why am I even doing this? I’m never going to play soccer again. To keep myself motivated I’ve been going on runs when I want to. Working out when I feel the need to.”

Bligh struggles to find motivation without soccer controlling her life. She has decided to take a break from her 18 year long training, to share time with other important factors in her life.

“Right now, I am studying for the GMAT (Graduate Management admission Test) which I take in December, which is during our usual practice times; I use that time to study. I recently got a boyfriend, that’s another thing I manage my time with for school. I try to workout but that’s on the backburner.”

As much as Bligh loves the sport, she has accepted the fact that her career in soccer is over. With her studies and other college extracurricular, she has moved onto working to be accepted into graduate school. She plans on achieving her masters in Business Administration.

Although the ending of a soccer career is heartbreaking, Bligh has made the most of her extra time without it. The memories of scoring the winning goal in a tied game will always stay with her, as nothing will ever feel quite like that moment again, but Bligh looks forward to many more memories to come, with or without soccer.