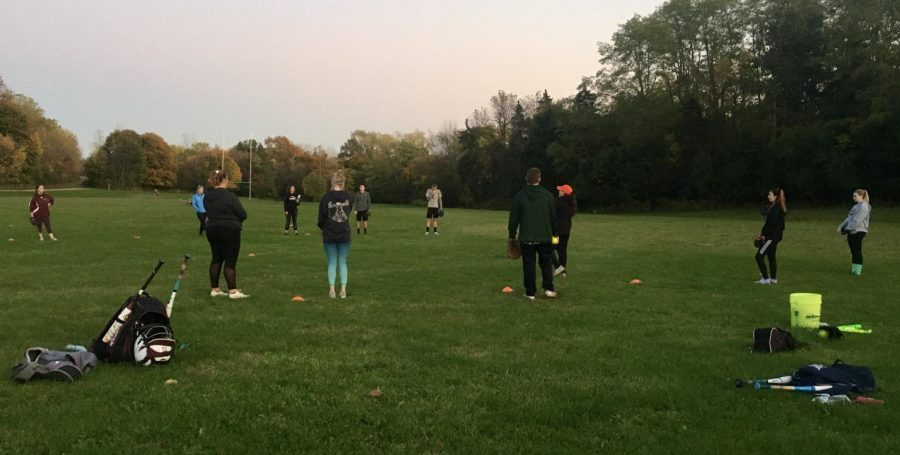 A new coed club softball team is working to becoming an official club sport on campus, according to their president, Aryana Shaheen ‘21.

Shaheen and her two assistant coaches, Kayla Curtin ‘21 and Bryanna Keyes ‘20, started the club last fall after realizing that although there were several other club sports on campus, there were no softball or baseball club teams.

“I was disappointed because softball was my entire life in high school. I was actually going to play on the team here, but I messed up my shoulder before I could,” said Shaheen. “I lived and breathed softball growing up. It has always been an outlet for me to get out and release stress.”

Some of the major obstacles they’ve faced has been a lack of funding and finding other schools to play that are also coed. Each of the coaches say that any equipment expenses have come out of their own pockets or from fundraisers. Shaheen says that she has spent anywhere from $600 to $700 buying equipment for the team. This includes a net, tees, softballs, extra gloves, extra bats and helmets.

There is a three-year grace period to be considered an official club sport under athletics, which for them means fall of 2022.

“This is not an easy process. It makes it hard to get club sports going and hinders people from starting them,” Keyes said.  However, with official club status, the team will get funding from the school, can begin to play other schools, and will be open to playing adult teams as well. Their field is minimal, and the club budget will pay for them to get bases installed, which cost roughly $80 each.

The team has about 25 active members, with women slightly outnumbering men. Their practices are year-round, twice a week, on Wednesdays at 6 p.m. and Saturdays at noon. Practices usually involve a quick warmup, throwing drills, relay drills, and hitting drills. During the winter, they move practices in the athletic center for open-gym and work on lifting and throwing form.

“Our hope is that this spring, we can begin to play local, coed adult teams that play slow pitch,” Curtin said. The team currently plays games against each other, but they aim for 10 to 15 games per season.

“If we can get people to come, smile and laugh while they are at practice, that’s honestly my biggest goal. Students should know this club is judgement-free,” says Shaheen. “Whether you want to go Division I or you’ve never touched a softball in your life, it’s honestly just about learning, getting to know the game, and having fun with your friends.”

Anyone interested in being a part of the club is encouraged to contact Aryana Shaheen. New players are welcome to jump in at any point in the semester.