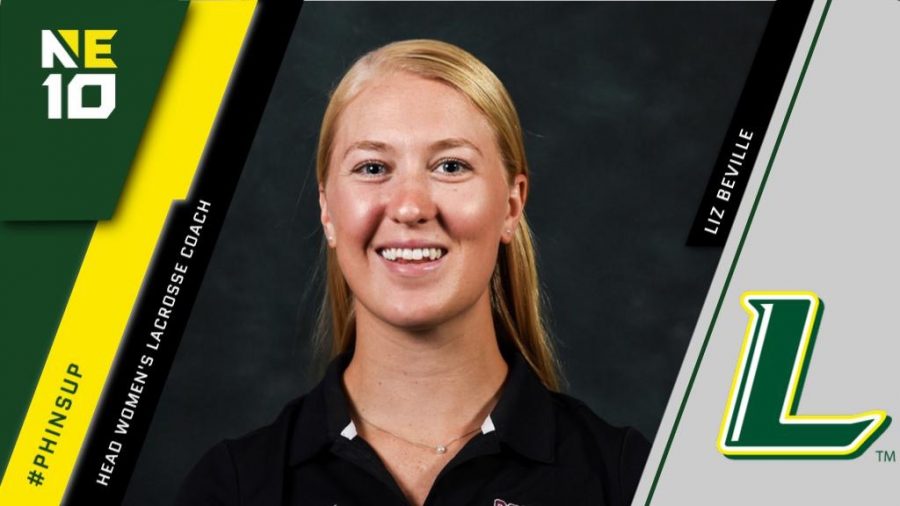 After four years of Coach Kathy Taylor leading the Le Moyne women’s lacrosse team to the NCAA championship and winning it all in 2018, Taylor has stepped down and Liz Beville has been named the new head coach.

“Our expectation is to go back to NCAA,” Belville said. “I think the team right now knows what it takes to get there, and it’s our job as coaches to implement the right practice plans and game strategies. But our goal is to win a national championship.”

Beville began her athletic career playing high school lacrosse at Jamesville Dewitt. She played for SUNY Cortland under Taylor. Beville then landed her first job at Muhlenberg College before moving back to Syracuse to get her Master’s in Sports Management at SUNY Cortland. After graduation, Beville worked at Cortland as a graduate assistant coach. Beville then took a job in Colorado with a Cortland alum, which eventually led her back to New York when she was named assistant coach and promoted to interim head coach at Colgate University.

“At each position I’ve learned new things from different coaches,” said Beville, “Especially after playing for Kathy Taylor, learning from her, working as an assistant coach, and being thrown into a major position last year as interim head coach at Colgate, I’ve learned a lot from experience as to what worked and what didn’t work. I’m able to bring everything I’ve learned to Le Moyne and develop my own coaching style.”

Taylor has been named head coach at Colgate.

One thing Beville has learned is the importance of building a solid foundation which includes building relationships with and between each team member and trust for one another.

“There’s a quote I always go back to, it’s ‘they don’t care how much you know until they know how much you care,” said Beville, “Especially starting a new program, that’s something I’ve been trying to show right away.”

The team’s graduate assistant head coach, Jackie Pardee ‘18, has seen how Beville has built trust with the team and her focus on community.

“I think she has acclimated quite well to the culture we have created as an athletic department,” said Pardee, “We pride ourselves on caring for the whole person when it comes to our student athletes, and while Coach Beville could have started ordering equipment, organizing schedules, or thinking about the ‘X’s and O’s’, she instead took the time to meet with all thirty girls individually and in person to get to know them, their journey, and how they ended up at Le Moyne.”

Pardee said Beville has set aside time to work with players in small groups and break down the fundamentals of certain movements, which can often get lost when focusing on bigger concepts of the game. The team is optimistic about Beville and the upcoming spring season and, according to Pardee, have loved having more individual attention.

“With her being so young, she’s approachable and brings new and fresh ideas to the team,” said Sydney Meagher ‘21. According to Meagher and Pardee, Beville has brought new team-building and leadership activities that they’ve been incorporating into their training for the spring. These activities include “Fit Fridays” and motivational-leadership exercises, or “motiships” as they call them, that work on building communication and problem-solving.

“Coach Beville has already made positive impacts through her drive and passion,” said Julia Sardella ‘20, the senior captain. “Because she was coached by Kathy Taylor, she is already familiar with the coaching style and culture that Kathy developed, and wants to build onto it rather than rewrite it. It is exciting having a new leader and someone that we can trust to lead us to greatness.”