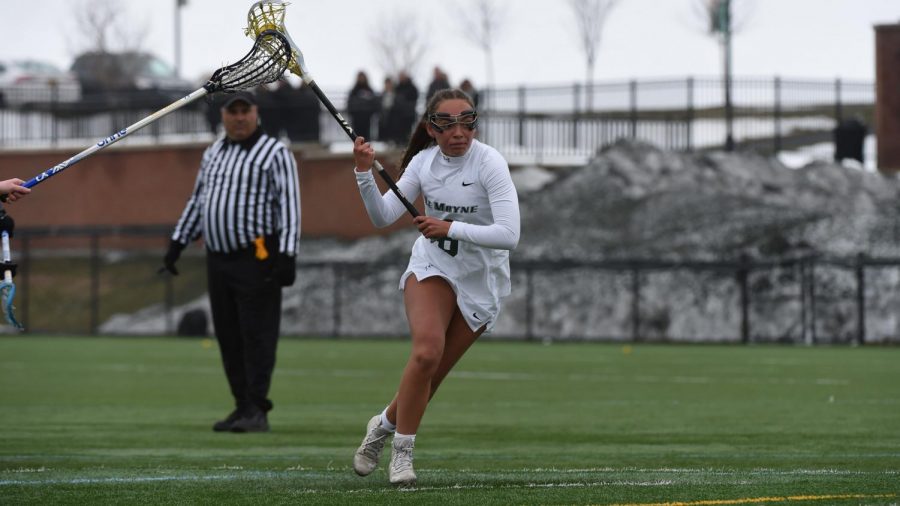 For the second straight season, after 13 games played the 3rd-Ranked Le Moyne College Women’s Lacrosse team is a perfect 13-0, and are one of only three remaining unbeatens in the nation.  The Dolphins have continued to get better game by game and may just be the squad for head coach Kathy Taylor that could bring this school its first National Championship in women’s lacrosse.

Although this Dolphins team may be incredibly young, their depth has seemed to show no limits and with the caliber of talent and poise these women possess the inexperience of youth just doesn’t seem to matter.  Le Moyne not only has a relentless attack with four different scorers with over 30 goals on the season but they have the 5th-ranked scoring defense in the nation as well, making the Dolphins one of, if not the most, complete teams in the country.

Le Moyne is paced offensively by the “Fierce Four,” junior attacker Bryanna Fazio, sophomore midfielder Nicole Delany, sophomore attacker Sidney Hall and freshman attacker Erin McMullen.  The four of these young women have amassed 148 of the 205 goals scored by this Dolphins team and almost half their assists.

The beauty of this team, however, is that if any of those four are being double, or triple, teamed by opponents, then there is an assembly line of others that can step right in and fill the void.  With veterans like junior midfielder Monica Sanna and risings stars such as freshman attacker Emily Altland and freshman defensive midfielder Sydney Meagher able to step in at a moment’s notice, the Dolphins have a seemingly endless supply of talent to tap into.

That same relentless ferocity they show on offense can be applied to the defense that has continued to impress from the opening draw of this season for Le Moyne.  Led by senior Kelly Gaffney, sophomore defensive midfielder Olivia McEntee and junior Jessica Dussing, the Dolphins defense uses an incredible mix of speed and toughness to stifle opponents and shut down major goal scorers.

Not only does that speed on defense help in shutting down opponents, it also helps to start the transition opportunities for Le Moyne’s offense as they can move the ball the entire length of the field without having to make a pass, not allowing the opposing defense time to set up.

You cannot talk about Le Moyne women’s lacrosse and in the same breath not mention sophomore standout out goalkeeper Hannah George.  Not only is she the energy leader for this team, but she provides an immeasurable safety net in the cage for the Dolphins. Following an All-American freshman campaign, the reigning NE-10 Goalkeeper of the Year is sitting at 3rd in the nation in goals against average allowing just over six goals a game.

Both the offense and defense were proudly on display this past week for the Dolphins as it saw them pick up two wins, one on the road and one at home, in which they outscored their opponents, 32-7.  Their scoring margin has not gone unnoticed this season as they sit comfortably in the top five in the country in scoring margin at over nine goals a game.

They started the week on the road where they were easily able to dispatch Southern Connecticut State by a final of 18-3 on Tuesday, Apr. 10, in New Haven, CT.  The Dolphins scored the first 14 goals of the game, a contest which was 13-0 at halftime, and allowed a mere six shots on goal from the sticks of SCSU.

Le Moyne was led by Nicole Delany as she found the back of the cage four times in the first half on only six shots.  Not to be outdone, Sidney Hall and Bryanna Fazio both tallied a hat trick on the day for the Dolphins with Emily Altland adding two to the cause as well.

For Bry Fazio, this marked the eighth time in her last nine games that she recorded at least three goals and gives her 42 on the season to lead the team.  She also leads the team with 89 draw controls, ranking her in the top 10 in the nation in that category and pulling her within four of the program record 263 career draw controls held by Gabrielle Kamide ‘13.

Le Moyne was at home for the second and final game of the week as they played host to 14th-ranked Merrimack on Saturday, Apr. 14, at Ted Grant Field.  The Dolphins had never lost to Merrimack in their seven all-time meetings and didn’t hesitate to make it eight straight beating the Warriors handily by a final of 14-4.

The teams traded goals in the first 3:30 of the game, but Le Moyne rattled off four straight over the next 17 minutes to separate themselves from the Warriors for good.  The Dolphins were able to hold Merrimack, a team averaging over 38 shots on goal per game, to just 10 in the contest on Saturday.

Nicole Delany, led the way for the Dolphins for the second straight game as she racked up five goals on the day, which gives the sophomore at least three goals in five of her last six games.  Emily Altland continued her explosive month as the freshman tallied four goals on the afternoon for her first collegiate hat trick. Monica Sanna also added a hat trick for the Dolphins, all three of her goals coming in a span of two and half minutes in the second half.

Le Moyne controlled the game from the opening draw, and in fact, won the first nine draw controls of the game and were 13 of 20 on the game, even without Bry Fazio on the field after she had to leave the game midway through the 1st half with her second yellow card.  It didn’t matter for the Dolphins though as Monica Sanna, second on the team with 66 draw controls on the season, stepped in and got six pretty easily as the Dolphins cruised in this one.  Hannah George picked up her 36th career victory in the cage as she recorded six saves on the day.

Le Moyne (13-0, 9-0 NE-10) is on the road Tuesday, April 17, for a match up at American International College and then returns home on Saturday, April 21, at 12 PM to take on 20th-ranked Bentley for their final regular season home game of the year.  You can catch their home game live on PhinsTV on Saturday the 21st and as always can keep up with all the latest scores, stats and news at lemoynedolphins.com