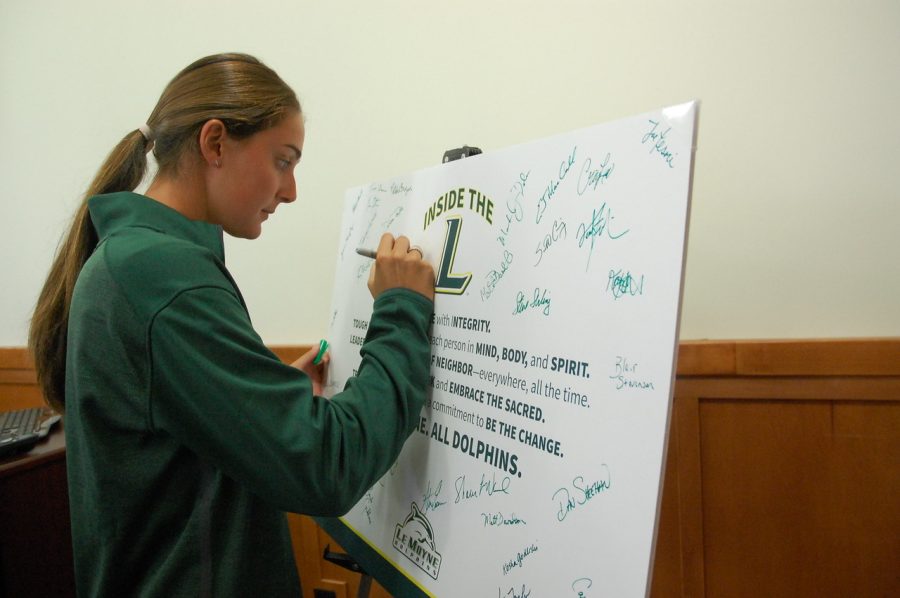 Men’s basketball student-athlete Tyree Chambers has achieved recognition on the Commissioner’s Honor Roll list for the past four semesters. Chambers has focused on balancing academics and athletics through time management.

“Over the course of my two years at Le Moyne the most important thing for me in having success as a student-athlete is managing my time properly,” said Chambers.

Athletic Director Matt Bassett is not surprised by the student athletes’ success as he attributes such academic accomplishments to their focus.

“The academic accomplishments of our student athletes this past semester, and consistently over the past several semesters, is indicative of the mindset of the young people we serve,” said Bassett.

Le Moyne athletic programs offer student athletes during their seasons the option to attend study hall throughout the week, an opportunity which has helped the department reach high academic achievements, while also helping student athletes manage their work loads.

“These are student athletes who are extremely focused on high levels of excellence and achievement in anything that comes their way,” said Bassett. “It is not surprising to me that we are achieving the highest levels of academic achievement in the department’s history.”

Also, Bassett feels that the support of coaches, as well as the commitment from faculty members focused on the greater good of Le Moyne’s athletic program, has helped pave the way for student athletes to be successful both on and off the court.

“The combination of great and caring coaches, and a personally committed faculty, provides the necessary platform for these young people to explore and pursue their very best selves,” said Bassett.

Le Moyne College looks to continue the academic success their student-athletes are having, allowing them to consistently achieve national recognition.

“By any academic metric or standard we use—locally, regionally, and nationally—Le Moyne student athletes are consistently recognized among their peers as among the most accomplished in the country,” said Bassett.