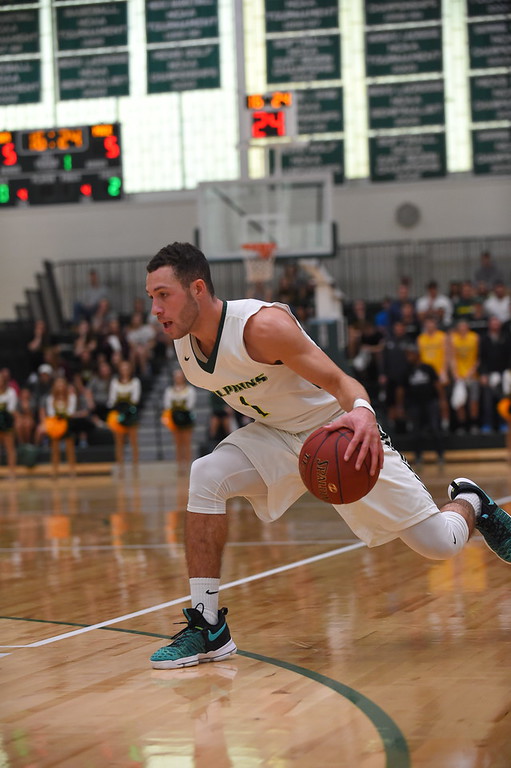 Both Le Moyne College basketball programs used red hot shooting and stifling defense to win their respective NE-10 Conference Tournament Quarterfinal match-ups in convincing fashion on the last Sunday of February at Ted Grant Court. The home court advantage was apparent as both the Women’s and Men’s basketball teams had huge second half performances to sweep their way to the NE-10 Semifinals for the second straight year.

The 2nd-seeded women’s team started off the afternoon by downing 3-seed Saint Anselm by a final of 77-49 as they used their best performance from beyond the arc all season to pave the way. The Dolphins were lights out as they hit 12 three pointers, the first time all season they have hit double digits from deep.

They were led by sophomore standout guard McKayla Roberts who put up a season high 27 points including seven of the teams 12 threes. Those seven three pointers tied her for the most in a single game in program history with Jennifer Dennett who did the same just over 24 years ago. Roberts also added 7 assists as the offense for the Dolphins was clicking the entire afternoon.

Le Moyne shut out Saint A’s sophomore forward Shannon Ryan, one of the best players in the nation, from the floor in the second half as the only point she was able to muster came on a free throw midway through the 3rd quarter. Senior forwards Courtney Webster and Corinne Poitevien used a combined attack in the paint to suffocate and frustrate the All-American candidate. The Dolphins only turned the ball over three times in the game, their lowest tally of the season.

Le Moyne was able to hold Saint A’s to only six made field goals in the second half, three of which came after both teams had switched out their lineups. The Dolphins outscored the Hawks 41-20 in the second half for their third straight double digit win.

Eight Le Moyne players in total found themselves on the scoreboard, four in double figures. The Dolphins starting front court combined for 25 points with Senior forward Joanna Dobrovosky putting up 13 and Courtney Webster with 12. Junior guard Madison Purcell added 10 points to the cause including a pair of threes.

Le Moyne will be on the road for their Semifinal match up on Thursday, March 1st, when they will take on the 1-Seed and 7th ranked team in the nation, Stonehill, for a chance to play in the NE-10 Conference Tournament Finals.

The 1-Seed Le Moyne College Men’s basketball team ended Playoff Sunday with a 59 point 2nd half as they defeated the 4-Seed Stonehill by a final of 99-60. The Dolphins shot over 73% from the floor on the game, 77% in the second half, which set the single game record for field goal percentage in the program’s history.

Le Moyne led by only five at halftime, but they used a 28-4 run over the first ten minutes of the second half to put the game out of reach for good. The Dolphins had six players in double figures, and of the 11 Dolphin players that checked into the game, 10 registered at least four points. A trend they have been maintaining all season long.

The 99 points Le Moyne scored in this game was their highest output on the season and is the highest output in the three years that head coach Patrick Beilein has been at the helm. This is only the third time in the last eight years that the Dolphins have scored over 90 points in a game, two of which have come this season.

Le Moyne welcomes the 2-Seed Merrimack for their Semifinal game on Wednesday, Feb. 28, at 7 PM on Ted Grant Court. The Dolphins as the one seed will host every game including the championship.

As always you can keep up with both teams and how their playoff runs are progressing by going to lemoynedolphins.com for all the stats, scores and news you will need.