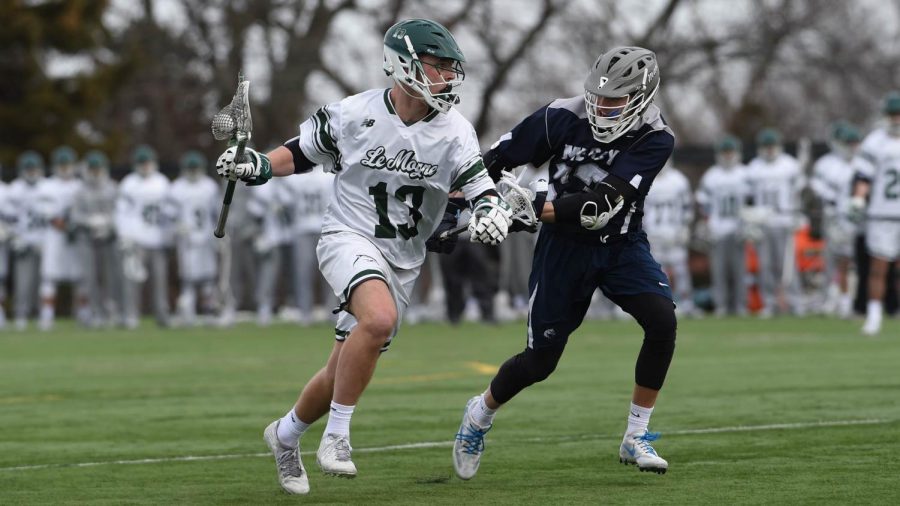 The 2nd ranked Le Moyne College Men’s lacrosse has used an unyielding attack in tandem with their patented lock down defense to easily pick up victories in each of their first two games of the 2018 season.  The Dolphins racked up 31 goals while holding their opponents to only seven as they start their quest for a 6th National Championship.

Le Moyne started the season on their home turf, Ted Grant Field, with a Top 15 win against the 13th ranked Mercy College Mavericks on Saturday, Feb. 17, by a final of 12-3.  The Dolphins had four players with a crooked number in the goal column, with a total of six Dolphins scoring on the day overall.

They were led by senior attackman, and leading scorer from a year ago, Justin Kesselring who racked up four goals and one assist in the win.  Junior midfielder Josh Slowinski, sophomore attacker Riley Larson and sophomore attacker Jake Lewis, a transfer from Cleveland State, all had 2 apiece as well.

On the defensive side, Le Moyne’s senior All-American defensemen Brendan Entenmann locked down Mercy’s leading scorer for the entire game not allowing him to score a goal.  Entenmann also ran the length of the field and split two defenders to grab his first goal of the season in the 2nd half.  The rest of the defense played just as well as they shut out Mercy for the entire 2nd half never allowing an avenue to the cage.

Redshirt junior goalkeeper Jack Sweeney had a stifling day in the cage as he scooped up a career best 16 saves which tied him for the most saves made by a Le Moyne goalkeeper against a non-conference opponent over the last 16 seasons, the first time since Alex Krawec in 2015.  This tallied Sweeney’s 15th victory between the pipes as a Dolphin.

Le Moyne scored 11 of the final 12 goals in the game including the final seven.  The victory marked the 19th straight season opener that Le Moyne has won in head coach Dan Sheehan’s 21 year tenure.

Le Moyne went on the road for their second game of the year to take on Chestnut Hill College where they cruised to a 19-4 victory on Saturday, Feb. 24, in Philadelphia.  The Dolphins scored 17 of the first 19 goals of the game as they dominated from the opening faceoff to the final horn.

Le Moyne put the hammer down once again on the offensive end as they spread the wealth to 12 different players, six of which had at least two goals.  Just like in the season opener, the ball movement on the offensive end was a dizzying flurry of passes and shots for which Chestnut Hill had no answer.

With an 11-1 halftime lead, coach Sheehan decided to give some of his younger goalkeepers an opportunity in the cage as both junior Kyle Lumpe and senior Bryan Schenk split the second half minutes.  Kyle lumped played 20 minutes with only two goals allowed and Schenk stepped in for the other 10 minutes only allowing one goal.

Le Moyne will return home on Thursday, March 1, at 3 P.M. for another non-conference matchup as they host Roberts Wesleyan.  You can catch all the action live on PhinsTV and lemoynedolphins.com.