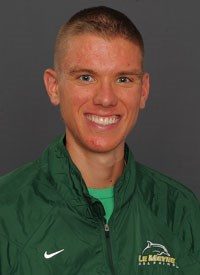 Buffalo, NY- It was only four short years ago that former West Genesee Wildcat Sean Beney put on a Le Moyne Dolphin cross-country singlet. Beney, a walk-on at the time, embarked on an athletic journey that would take him all across the Northeast. All the while scouting out his competition and focusing on his craft, Beney’s spirit, energy and commitment never wavered. And finally, as the sun slowly sets on his collegiate cross-country career, Sean enters the final straightaway; the NCAA Division II Championships in Evansville, Indiana.

Beney’s path to the National Championships was not an easy one, as the racing conditions at the Audubon Golf Course for the NCAA East Regional meet in Buffalo, NY were less than prime. These conditions subsequently made for a rather muddy, slick, and wet race. Regardless, Beney persevered through the stiff competition, placing fifth among the field of 158 runners. With Beney crossing the finish line in a time of 33:28 flat over the 6.2 mile course, he became one of three individual athletes reaching the qualifications to continue their season onto the main event. However, while many of the runners coming from the East Region are from established distance-running programs, Beney is the lone harrier who does not hail from a dominant program.

Rather, Beney has been the enabler of the men’s cross-country program. Aside from being the most consistent runner on the men’s team over the last four seasons, combined with his leadership role as team captain, the established culture surrounding the program plays a large part on him. And yet, perhaps more importantly, Beney has become the first Dolphin in the program to qualify for the National Championships, achieving the long awaited goal the program craved.

“Since Sean arrived at Le Moyne College, he has dedicated himself to improving as a runner” said Head Cross-Country Coach Scott Love, “Sean has had a major impact on the program as evidenced by our program having three members of this year’s team on the All-Region team (Beney, Nick Taylor, and Chris Davitt).”  Aside from impacting the program by mentoring and teaching his younger teammates, Beney has instilled the lifestyle associated with running in his teammates. “(Sean) has realized and embraced running as a lifestyle and has each year become more intelligent and dedicated to making adjustments to his life and sport to improve,” added Coach Love.

As Beney embarks on his final XC road trip, he’s reminiscent of his upstanding growth over the last four years. “Le Moyne has really helped me to grow and develop as an individual, student, and athlete,” said Beney, “I credit my growth to the awesome faculty, coaches, classmates and teammates that have helped and supported me along the way.”

Rather than celebrate his accomplishments up to this point, Beney has one final hurdle left to clear before he can write the final chapter in his excellent collegiate XC career: deliver a memorable performance for the program and institution that means so much to him. “The cross-country program has probably been my biggest source of support in my time at Le Moyne,” mentioned Beney, adding; “My teammates and coaches have always been there for me to share in the good times and support me in tough times… I want to make my team proud (at Nationals). Obviously I’m really excited for it, because it is definitely going to be an amazing experience and I consider it a reward for years of hard work.”

Beney continued by saying  “But above all, I want to represent my school and team, this is as much their nationals as it is mine, because without them there is no chance I would be in this position. This race is for them.”

While Beney has put this race into perspective, look no further than Head Coach Scott Love for added guidance, “Sean is an example of what you can achieve at Le Moyne if you believe in the program and in yourself. The sport of cross-country reveals character, and Sean has shown his true grit and iron will, as both a runner and a person.”

Beney dives into unchartered waters for a Dolphin harrier as he makes his final collegiate trip to the cross-country start line. The NCAA National Championships will begin on Saturday November 18th in Evansville, Indiana with the start time yet to be determined. Those wishing to tune into the race can follow it on NCAA.com with live stream/live results.