Softball Drops Series Against No. 23 Adelphi 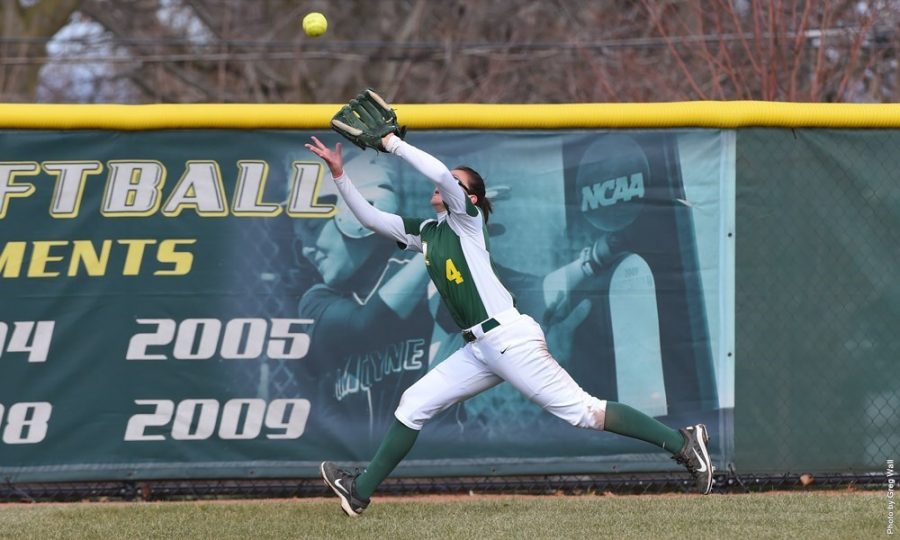 Garden City, N.Y. –– Coming off a pair of wins over Mercyhurst University on March 29, the Dolphins traveled to Garden City for a two-day road trip against the Adelphi Panthers. Le Moyne proved to be successful on the first day of the series, taking home the 3-0 win on Saturday. In Sunday’s second and third games of the series, the Panthers proved to be too much as they squeaked out a 3-2 victory in the first and a 9-3 win in the second.

In Saturday’s win, the Dolphins’ excellently executed offensive performance was critical in holding off the nationally-ranked Panthers. The scoring opened in the fifth inning for Le Moyne with two outs and Courtney Case on second base. Peyton Bellrose turned on a pitch, sending it into left field for the RBI double to send Case home. Case scored again in the sixth inning on an Adelphi error. She also recorded her 200th career hit. Lauren Zazzaro scored in the seventh inning, tacking on an insurance run thanks to an RBI walk by Ally Nicolossi. Alexis Eastman recorded the win for the ‘Phins, pitching seven scoreless innings, giving up three hits, and recording 10 strikeouts.

Sunday’s games held different challenges for Le Moyne as they played a doubleheader against an Adelphi team that was looking to avenge their Saturday afternoon loss. The ‘Phins opened the scoring for the game in the first inning with a Case triple. She later scored on Nicolossi’s RBI groundout. The Dolphins scored again in the third inning, when Nicolosi reached home base on Sabrina Riley’s double, giving Le Moyne a 2-0 lead. From there, the Panthers sandwiched three runs over the next three and a half innings to clinch the win. Eastman took the loss, pitching six innings and striking out three, giving up three hits and three earned runs.

Sunday’s series-ending contest saw Le Moyne struggle to keep Adelphi’s offense at bay. The Dolphins put up a run in the second and third innings thanks to Bellrose scoring on Emily Bagley’s RBI groundout, and a Sabrina Riley RBI single that scored Case. They scored again in the fifth when Bellrose’s double scored Case. From there, the Panthers tacked on three more runs in the sixth and the Dolphins lost, 9-3. Bellrose gave up nine earned runs on thirteen hits.

The Dolphins (17-8, 1-2) travel this weekend to play doubleheaders against St. Anselm on Saturday, April 8, and St. Michael’s on Sunday, April 9.