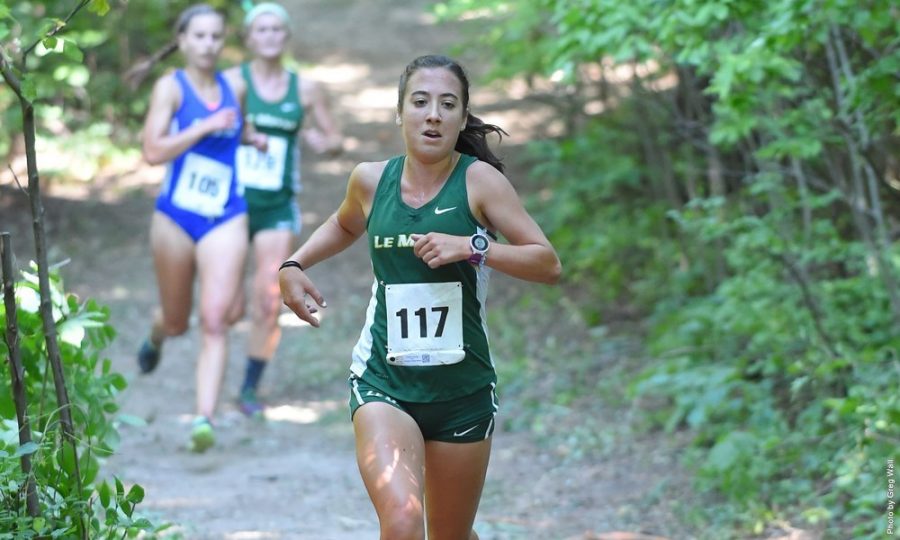 Led by juniors Sean Beney and Jeanette Cudney, the men’s and women’s cross country teams both placed eighth out of 15 teams at the Northeast-10 Championships held in Easton, Massachusetts on Sat, Oct. 22. Both Cudney and Beney claimed All-Conference accolades. This was Beney’s first All-Conference selection, and a third consecutive selection for Cudney.

On the men’s side, Beney started the scoring for the Dolphins, placing 17th out of the 154 runner field, with a time of 23:53 over the 8K course. Freshmen Nick Taylor and Chris Davitt crossed the finish line 18 seconds apart, Taylor finishing 32nd overall in a time of 26:39, and Davitt pacing behind in 41st place in 26:57. Among freshmen competing in the race, Taylor and Davitt finished third and fifth, respectively. Griffin Klein was the fourth Dolphin to cross the finish line, placing 67th in a time of 27:57. Freshman Dom Battaglia rounded out the scoring for the men’s team with a 113th overall finish in a time of 29:20.

“Considering three out of our top five were freshman, I was pleased with how they performed in a meet much bigger and more competitive than any of them have ever been at,” said captain Beney. “This shows how mentally strong they are, a hugely important quality to have. The fact that our entire top five is returning next year make me extremely excited for the future.”

For the women’s race, Jeanette Cudney helped pace the Dolphins with a 21st overall finish out of the 149 runner field, in a time of 23:35. Sophomore Brittany Mack finished with a time of 24:34, giving her a 51st place finish. Fellow classmate Rachel Miller followed Mack’s lead by crossing the finish line with a time of 24:50 to place 62nd. Freshmen Jordan Sloan and Siara Clos rounded out the scoring for the ladies, finishing 63rd and 66th overall. Sloan finished seven seconds behind Miller, while Clos crossed the tape in 25:02.

Both the men’s and women’s teams both claimed victory to the points at stake for the Upstate Challenge. This means that they placed higher in the meet than The College of Saint Rose, Le Moyne’s conference rival. Looking ahead, the Dolphins compete in the NCAA East Regional with the chance to go to the NCAA Division II National Championships in St. Leo, Florida at stake.  The women’s team is currently ranked eighth in the region. For the men, Beney hopes they  can either hold or improve upon their ninth-ranked spot in the East region.

“The goal is for everyone to be at peak health and performance, which I think we are on track for right now, and to have our best performances at the most important time of the year,” he said. “I’m excited to get back out there and build on the success we have had all season.”