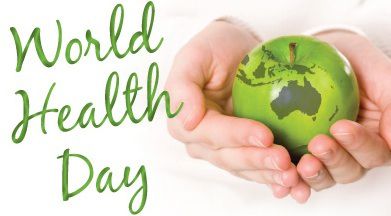 Today, April 7, is a day we celebrate every year as World Health Day.

World Health Day was established by the World Health Organization (WHO) on April 7, 1948. It is a specialized agency which is part of the United Nations that focuses on international public health. In recent years, it has overseen international management of swine and bird flu, and a few years back an outbreak of mad cow disease in Great Britain. The most recent focus has been on the Zika virus.

Having this branch of the United Nations working throughout the world has helped managed many recent outbreaks of various illnesses. The World Health Organization has also eradicated a number of fatal diseases since it’s inception in 1948. An initial priority of the organization was to control the spread of malaria, tuberculosis, and sexually transmitted infections, such as syphilis and gonorrhea. It also saw reduced rates of smallpox and polio and created prevention treatment and support plans to combat the AIDS virus.

Each year on World Health Day, the organization identifies a particular disease/disorder that it feels needs the world’s attention, for the purposes of prevention and treatment. What’s interesting is that they also include non-communicable disease that can cause “disability and premature death.” This year, the organization has identified depression as a significant cause of ill health in the world today.

According to the latest estimates from WHO, more than 300 million people are now living with depression, an increase of more than 18 percent between 2005 and 2015. Lack of support for people with mental disorders, coupled with a fear of stigma, prevent many from accessing the treatment they need to live healthy, productive lives.

The WHO identifies depression as a common mental illness characterized by persistent sadness and a loss of interest in activities that people normally enjoy, accompanied by an inability to carry out daily activities, for 14 days or longer. In addition, people with depression normally have several of the following: a loss of energy, change in appetite, sleeping more or less, anxiety, reduced concentration, indecisiveness, restlessness, feelings of worthlessness, guilt, or hopelessness, and thoughts of self-harm or suicide (Diagnostic and Statistical Manual, 2013).

Not only are the symptoms of depression in and of themselves a hindrance to optimal functioning, but they are also associated with other noncommunicable disorders and diseases. Depression can increase the risk of substance use disorders, as people will “self-medicate” the negative mood state that depression brings, but in turn can escalate into the disease of addiction, another debilitating non-communicable disease. Depression is also an important risk factor for suicide, which claims hundreds of thousands of lives each year.

Dr. Shekhar Saxena, Director of the Department of Mental Health and Substance Abuse at WHO, said in a March news release that “a better understanding of depression and how it can be treated, while essential, is just the beginning. What needs to follow is sustained scale-up of mental health services accessible to everyone, even the most remote populations in the world.”

In order to combat this worldwide disease, the WHO has developed an initiative to get folks to discuss this epidemic called, “Depression: let’s talk.” The overall goal of this initiative is to ensure that people with depression both seek and get help.

“For someone living with depression, talking to a person they trust is often the first step towards treatment and recovery,” said Dr. Saxena.

So, on this day dedicated to helping others who suffer from depression, please reach out to anyone who you feel may be suffering. Offer to walk them down to the Wellness Center for Health & Counseling to talk with a counselor. Let them know they do not have to handle this alone and that there is hope!