The Boy in the Pink Hat 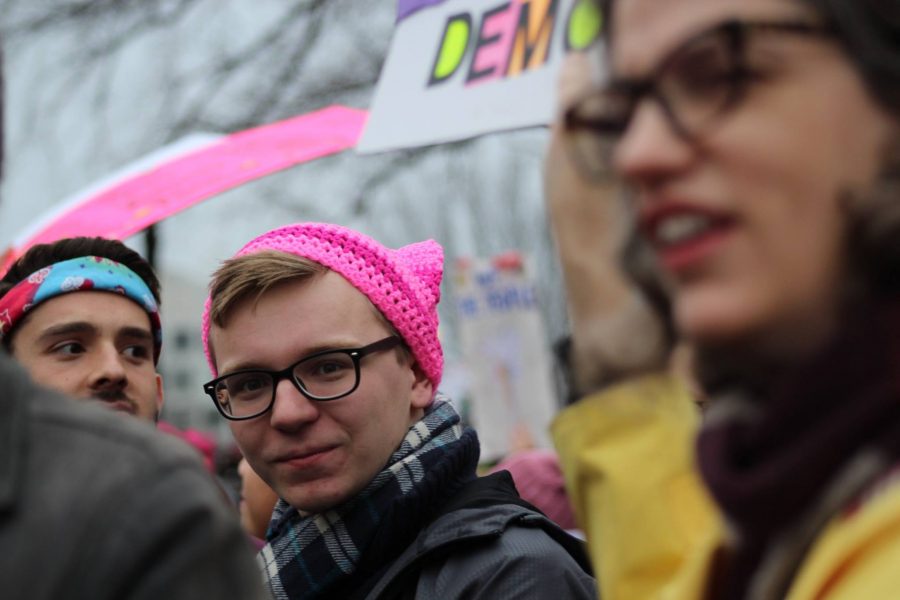 Much of my identity at Le Moyne has been tied to my position on The Dolphin. Something wholly unintentional, but inevitable when most of my time is spent writing for the paper, designing the paper, answering emails for the paper and thinking about the paper. Whether I like it or not, over the years at Le Moyne, I have gradually morphed into The Dolphin.

It’s hard being so close to something that gets put out into “the world” every week because once The Dolphin is printed, it no longer belongs to me. It gets turned over to the Le Moyne community, to its readers, and there’s a vulnerability in that––something that I’ve had to learn to get comfortable with. Sometimes it’s hard to differentiate myself from the paper, which also makes it difficult when something The Dolphin prints garners harsh response.

There has been some controversy surrounding last week’s front page story, “A Walk to Remember,” which featured a picture of a male Le Moyne student at the Women’s March in January. Some found it inappropriate and an anonymous person(s) posted flyers throughout the academic buildings with a picture of the front page and the captions, “Even when talking about women’s issues, The Dolphin can’t help but put a man on the cover. #WomenOutOfFocus” and “Why are men still the face of Women’s rights? (There were over 20 women from Le Moyne at the march. Not one could make the front page?)”

It was my decision to have that picture accompany the article and as the Editor-in-Chief I stand by that decision. I was aware that the picture would be controversial and would present some irony in the fact that the front page features a picture of a man at a Women’s March. I spent around 12 hours designing The Dolphin by myself last Monday, and during those hours I tried to talk myself out of using that picture because I knew some issues would be sure to follow, but I couldn’t bring myself to do it.

Yes, there were plenty of female Le Moyne students who attended the Women’s March, but out of the 12 pictures we had featuring female Le Moyne students, that particular picture was of the best quality and spoke to me the most. I thought it was beautiful how the photographer was able to capture a moment that felt so still in the middle of all the chaos. When I look at that picture, I almost feel like I’m intruding on an intimate moment between the subject and the photographer; one of understanding and of solidarity and of peace, as though they both know something America as a whole has been slow in realizing: Everyone should support women’s rights?

There is something to be said about perspective, how it twists and molds itself based on each individual person. While some found that picture offensive, I found it to be simply artistic. And I thought it said something about what Le Moyne represents, a community of men and women for others. How incredible is it that Le Moyne College is home to young men who care enough about women’s rights, human rights, to ride a bus in the early morning down to Washington, D.C. and participate in a march that is not about them?

I was told in a letter that my layout for the front page has helped to perpetuate the silencing of women and America’s patriarchal tendencies. That I have “poorly represented the entirety of the Women’s March” and have pushed “women into the shadow’s, even in stories about their accomplishments.” I will not dismiss this person’s opinions or try to silence their feelings by not addressing them, I understand their point of view and respectfully disagree with it at the same time. I think it is unfortunate that a picture, which as a woman I believe expounds on the message of the Women’s March, is overshadowing the words of a beautifully written article.

The people who have expressed their feelings over the front page have a lot of passion, it is clear in their letters and definitely clear in the posters. Like any club president, I know how much energy it takes to make flyers and post them around campus. I do think a different course of action could have been taken, though. One where we have constructive discussions and open up dialogue surrounding the front page. Maybe that’s the next “Ripped from the Headlines” topic.

I do wish more people would put that kind of energy into contributing to The Dolphin, seeing as it only functions because of a very, very, very small group of students––most of whom will be graduating in May.

I would like to direct my last few statements towards the men reading this. I want you to know, it’s okay. It’s okay to wear a pink hat, to be a feminist, to march for women’s rights and to still be comfortable in your masculinity––although, I use that term loosely because I’m not sure what it means to be masculine and what it means to be feminine. I do however know what it means to be a complex human with qualities that do not and should not be classified. To the men who went to the march, thank you. And to the men who didn’t attend, I wish you were there to stand with us, to experience the love and the hope. I wish you were there like the boy in the pink hat.