Conversations between SGA and administration offer hope and growth 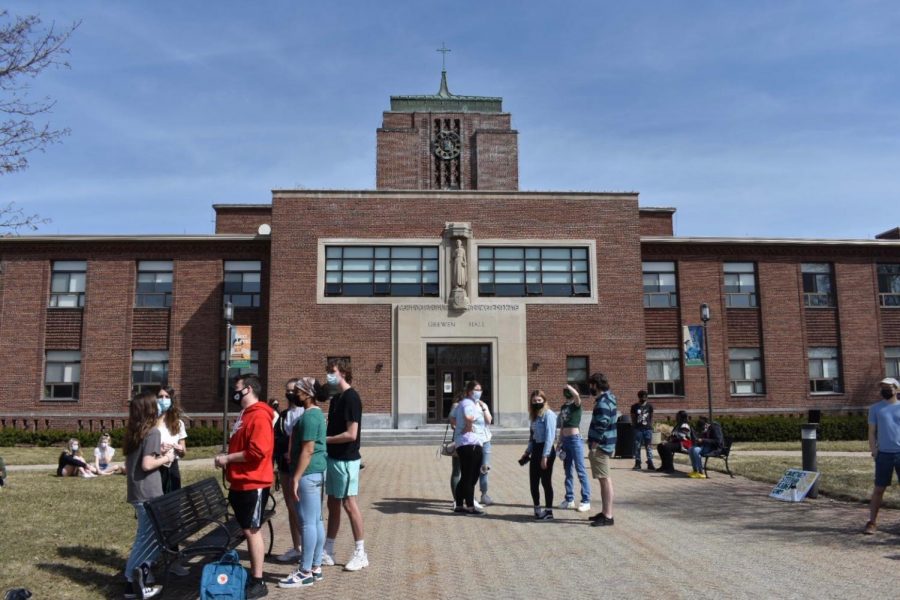 What began here at Le Moyne College as a negotiation for additional Mental Health Days between students and administration has now turned into a full-blown student movement that has students across all years demanding better resources and care for mental health after tragedy struck last weekend.

It all started around Wednesday, March 10, when students began raising concerns about a lack of Mental Health Days built into the spring semester. Those concerns were heard by the Student Government Association (SGA) and class representatives took the issue further to school administration to look for a solution.

The SGA sat down with several members of Le Moyne administration, including Interim Provost and Vice President of Academic Affairs James Hannan, Associate Provost for Student Development Anne Kearney and Provost Joseph Marina, at their March 12 meeting to come up with a solution that all parties involved would be satisfied with. Amongst it all, SGA President Danny Bonsangue asked students to remember this point: “Administration wants to help, but their hands are tied,” he said.

The obstacle Bonsangue was referring to is the Middle States, formally known as the Middle States Commission on Higher Education Accreditation. This is the board responsible for certifying Le Moyne’s degree programs. In order to meet their certification requirements, Le Moyne College, as well as other schools that they oversee, must meet a certain number of class hours. Because of the extended winter break and late return to campus, this left Le Moyne College Administrators with the job of figuring out how to build in the requested Mental Health Days and still meet the required accreditation hours without extending the semester further.

After a several hour-long meeting with SGA, administrators who sat in on the meeting agreed to bring the issue to the faculty senate. On Friday, March 19, the faculty senate agreed to one Mental Health Day on April 20, and agreed to push back study days and finals by one day. While the overall results were a mixed bag, this gave some students hope, though it left many with questions and a desire for more results along the same lines.

This desire, however, became amplified the weekend following the announcement of this compromise with the death of fellow student, junior Cory Gallinger, on Sunday, March 21.

Once the tragic news was sent to students via email, action began taking place rapidly. Students organized a peaceful protest the following day on campus, as well as a Student-Organized Mental Health Day on Tuesday. All of this was to bring awareness to the fact that students feel they need more resources from administration regarding mental health and well-being.

One student and an SGA Class Representative, freshman James Corl, created an online petition to garner support for the cause. The petition has over 6,000 signatures and numerous comments from not only current students but other supporters.

“I feel a particular responsibility to help get my fellow students the help they need regardless of my title. I wrote the petition not as a member of SGA, but as a concerned student seeing tragedy strike too often,” said Corl. “I talk with numerous people every day, from first-year students to seniors. In my conversations with them, mental health has always come to the forefront. However, after seeing my friends suffer through the third suicide in a year and a half, I felt the need to deliver a mandate directly from students concerned about this issue.”

In response to these events, Le Moyne has organized several student fora throughout the next week to give students a chance to speak directly with them and attempt to make them feel heard. Some student leaders are confident that with time, communication, and willingness to collaborate, we as a community will be able to improve, grow, and become better together.

“Hope,” Bonsangue answered when asked what word he would use to describe the first processes of negotiations. “How I think we [SGA] should work is: a student brings us an issue, we take a vote and take a position on it, and then we urge the school to take action. We do clubs, we do Opening Night, we do all that and it’s fun, but this gives me hope that SGA will continue to work the way I think it should.”

Corl echoed his sentiment. ““At the end of the day, we are all on the same team on this issue, administration and students alike. We both want to ensure that something like this will never happen again. With collaboration from both sides, I know positive, meaningful change can and will occur.”