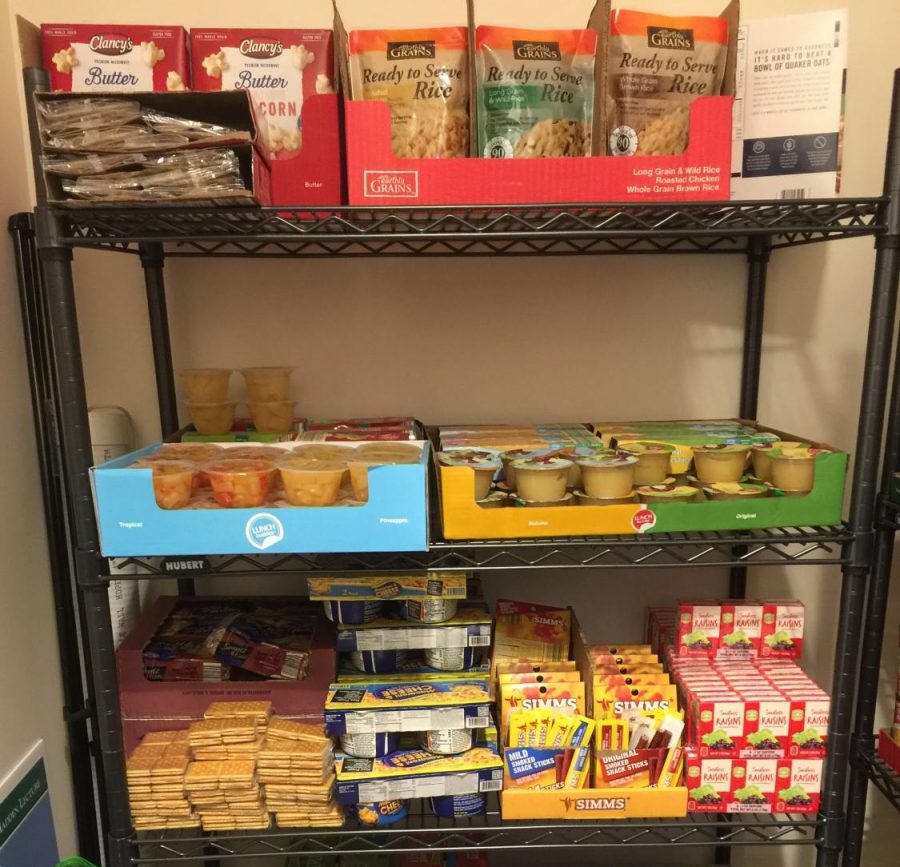 Between classes, studying, homework, clubs, jobs, and campus events, college can be an overwhelming and stressful time. The last thing students should be worrying about is not having enough food to get through the day, yet this is the unfortunate reality for many, even here at Le Moyne.

Food insecurity is defined by the U.S. Department of Agriculture as a “lack of consistent access to enough food for an active, healthy lifestyle.” Le Moyne recognizes that this is an issue for its students, so the school has various programs in an effort to offer assistance.

One of such programs is Phins Share Meals, which is made possible by SGA, Sodexo, and the Student Success Center. This program provides meal swipes for students by collecting swipe donations from the student body once or twice a semester.

Phins Share Meals was brought to Le Moyne by Beth Scanlon, a Student Success Coach, Campus Minister, and Advisory Board member for programs addressing food insecurity. The program was initiated in February 2017 after working closely with Jim Suriano, the General Manager of Sodexo at Le Moyne. Initially, it was challenging to receive approval from Sodexo, but Suriano was persistent, and after continued conversation with the food service provider, the company came on board.

In February 2017, the program officially began. The first collection was on College Giving Day, during which 1400 meal swipes were donated.

There has been one collection so far this year; approximately 400 students donated over 700 swipes. To ensure there are enough swipes, there will be another collection, likely very soon.

To receive meals through this program, students fill out a registration form and are approved by Scanlon. Currently, Le Moyne has 43 students receiving meals, and 430 meals have been placed on cards so far this year.

Typically, 10 swipes are put on a card at a time, but if a student needs more, they can request up to 30. The idea is not for the swipes to replace a meal plan, but to offer extra support for students who may need it. “A lot of people are commuters and don’t have a lot of food at home to bring to school,” explained Scanlon. “So this is a really nice supplement when they’re here for a full day.”

Another program offered through Le Moyne is Campus Cupboard, which was started in March, 2019. Functioning as a food pantry, it is open on either Thursdays or Fridays for two hours each week.

The Cupboard has options that are quick grab-and-go, such as granola bars, easy mac, and instant rice, but offers more substantial foods as well, like pasta and sauce. There are also personal care items available, from shampoo, to toothpaste, to feminine hygiene products.

Students are given 15 points per week to use toward items in the Cupboard, 5 of which are designated for personal care products. The only thing asked of students is that they bring their own bag.

Each time the Cupboard is open, about 30 students use it. Last year, it was used a little over 130 times by approximately 70 students. Between Phins Share Meals and Campus Cupboard, there were only 7 students who used both programs.

The last program available to students is Federal, rather than specific to Le Moyne. The Supplemental Nutrition Assistance Program, or SNAP, is a food stamp program which many students qualify for without even knowing it. To qualify, students must live either on campus or on their own, have a meal plan of 7 or fewer meals per week, work a minimum of 20 hours a week, and be a full-time student.

“I think people don’t know they can qualify for it,” said Scanlon. “I want to get the word out, so that people know and can access what they need.”

Students should not be penalized for hunger, yet it is difficult to focus on school when there isn’t enough food readily available to you. “Hunger is real, and when you’re hungry, you can’t think about anything else,” said Scanlon. “You get tired and fatigued, and you can’t study. It just impacts how you are as a student.” The programs offered by Le Moyne are a start in supplying students with the assistance they need to be at their best physically, intellectually, and socially.

If students would like to find out more about eligibility or the various programs offered, or are interested in helping or contributing, they can reach out to Beth Scanlon, [email protected]