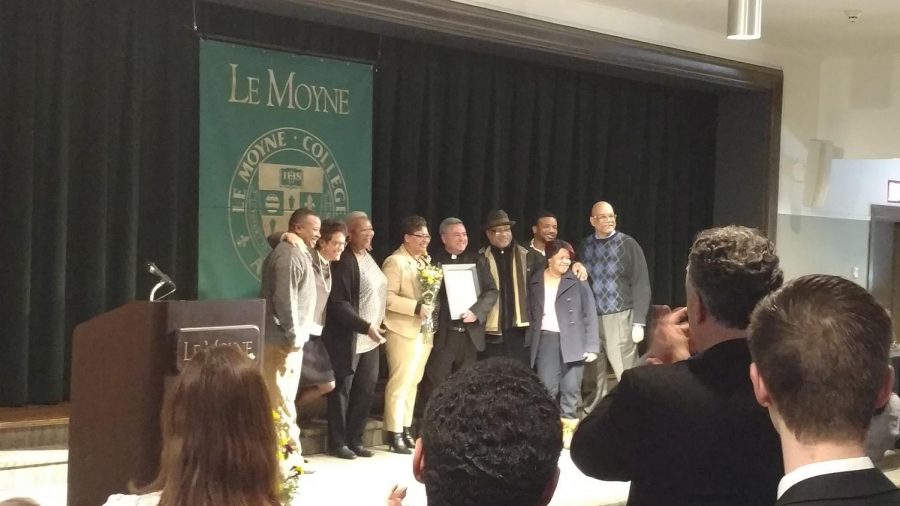 On Wednesday April 11 at Le Moyne College’s Annual Spring Convocation, Theresa Williams, whom you may recognize from the Den, received an award for her 31 years of incredible service at Le Moyne.

Anyone who’s interacted with Theresa knows what a warm, caring soul she is. Her bright smile and “Good morning, sunshine!” have made countless breakfasts better for our community. Theresa was nominated for the Ms. Bettye Dunn award, an award named after another Le Moyne employee.

The provost’s address was given by Fr. Marina who described the event as a “celebration of teaching, scholarship, and mentorship.” He said of Theresa and other non-Le Moyne faculty that they are “just as much a member of the Le Moyne community because of the care and cura personalis shown to students.” Cura Personalis is Latin for ‘care of the entire person’ and connects to our Jesuit liberal arts tradition of educating the whole person.

Our Le Moyne faculty members demonstrate Cura Personalis every day through their unwavering dedication and connection to the community. They carry out some of the most difficult jobs on campus—cooking, cleaning, groundskeeping, repairing, maintaining—and they often don’t get the recognition they deserve. That makes events like this convocation so much more important as our opportunity to give back to the people who have helped build and shape our community.

The faculty also responded to pressures faced by higher education: business models and the Excelsior program in particular. The Excelsior program offers free college tuition to students attending SUNY schools. While making higher education accessible to as many people as possible is good, these schools will be under pressure to move students through their major of choice as quickly as possible, cutting out core classes valued by the liberal arts tradition. This program also has the potential to take students away from private institutions like Le Moyne.

Father Marina also referenced a reading from Acts 5:17-26; “‘they are in the temple area and they are teaching’… where else would they be?” Father Marina described the faculty as the Apostles in the reading, “breaking forces that try to imprison our mission” to make the world a better place. He concluded by telling the faculty he was grateful for their “contribution to our mission”

Theresa’s nomination was suggested by the English Department’s Dr. Ann Ryan and the citation of Theresa’s service was read by President LeMura. Theresa’s reception of the award was met with a standing ovation and thunderous cheers, emphasizing how much she means to the Le Moyne community.

Closing remarks were also given by President LeMura. She said the event “lifts my spirits in ways I cannot explain” and voiced her immense gratitude to be part of this incredible community. She concluded with the optimistic note that there is no challenge we cannot overcome together, especially with so many wonderful people on board.