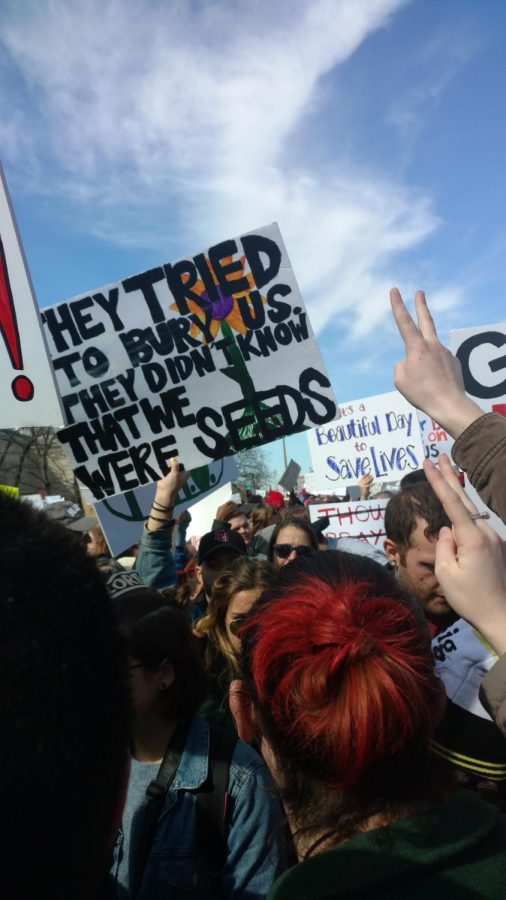 The March For Our Lives is created by, inspired by, and led by students across the country who will no longer risk their lives waiting for someone else to take action to stop the epidemic of mass school shootings that has become all too familiar.

The mission statement for March for Our lives is clear. People cannot, and will not, allow one more child to be shot at school. Teachers should not have to make the choice to jump in front of a firing assault rifle to save the lives of their students. We cannot allow one more family to wait for a call or text that never comes. Our schools are unsafe. Children and teachers are dying and we need to make it our top priority to save these people’s lives.

School safety is not a political issue. There cannot be two sides to doing everything in our power to ensure the lives and futures of children who are at risk of dying when they should be learning, playing, and growing. The mission and focus of March For Our Lives is to demand that a comprehensive and effective bill be immediately bought before Congress to address these gun issues. No special interest group, no political agenda is more critical than timely passage of legislation to effectively address the gun violence issues that are rampant in our country.

Politicians are telling us now is not the time to talk about guns after seventeen lives were mercilessly cut short in Florida. The March For Our Lives movement believes there is no better time than now.

On March 24, children and families of March For Our Lives took the streets of Washington, DC, Los Angeles, New York City, and more than 800 other cities around the world to demand that their lives and safety must become a priority. The Parkland teens lead the #NeverAgain movement and attended the protest along with many high-profile celebrities. These celebrities are attempting to use their fame to prevent such senseless massacres from occuring again.

Ariana Grande’s performance was powerful and one not to miss, as a bombing at her Manchester concert last year killed a number of her young fans. She sang “Be Alright.”, telling the crowd of thousands at the rally, “this is for those brilliant students here today that are leading this march and for everybody participating today. Thank you so much for fighting for change and for love and for safety and for our future.”

Children, parents, teachers, and many more people live in constant fear wondering when their child goes to school, if it might be there last day. This is unacceptable. Change has begun, inspired by and led by the kids who are our hope for the future. Their young voices will be heard.