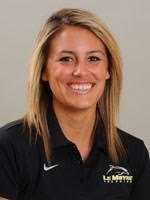 Le Moyne College’s spending between men’s and women’s sports is the most equal of all schools in the NE-10 conference, according to data submitted to the federal government. Of the 15 teams in the conference, Le Moyne has the smallest gap in coaches’ compensation and recruiting expenses.

Athletic director Matt Bassett says that they understand it is not just about getting these student athletes to join the Le Moyne family. “It is also about surrounding these young men and women with coaches and staff that will support them and give them guidance as they progress through these transformative years.”

They also promoted from within as Lizzy Cheeks took over as volleyball head coach in the same time period. Bassett raved about the former player’s commitment and dedication to the program and knew she would be a head coach someday. With these last four hires Le Moyne now has the second most female head coaches in the Northeast-10 Conference—with the next closest being Stonehill, an athletic department that is almost twice the size.

“We have some amazing female leaders in this building,” said Bassett, talking about all the female head coaches and assistants in the department. “The value of having those coaches and their experience as a resource, not just athletically, but to help guide and transform these young women’s experiences has no limits.”

While Title IX is not specifically geared towards athletics, the NCAA says that because collegiate athletics are indeed educational programs that the same principles apply. Young men and women should be afforded the same opportunities to not only participate in collegiate athletics, but should also receive the same opportunities in scholarships and spending from the institution regardless of their
gender and sport.

When it comes to how the spending is divided between both male and female teams, Le Moyne continues to prove their dedication to equal spending. They are tops in female recruiting expenses and overall spending between men’s and women’s teams. While they do spend more on male recruiting at $31,489, due to the men’s lacrosse team being double the size of the women’s, the $28,074 they spend on female recruiting is the most in the entire conference.

The next closest to that $3,415 difference would be Adelphi with a $7,770 difference in recruiting expenses between men’s and women’s teams. According to Bassett, every student athlete gets the same amount of practice gear as well as the exact same per diem when they go on the road no matter the sport. A point of emphasis that Bassett makes sure he includes in every decision that is made in regards to an athlete’s experience at Le Moyne.

“Whether it is a lacrosse team competing for a National Championship or a Track program in their 2nd year that is doing the best they can to set personal bests and compete with others in their sport, we make sure that every student is afforded the same opportunities.”