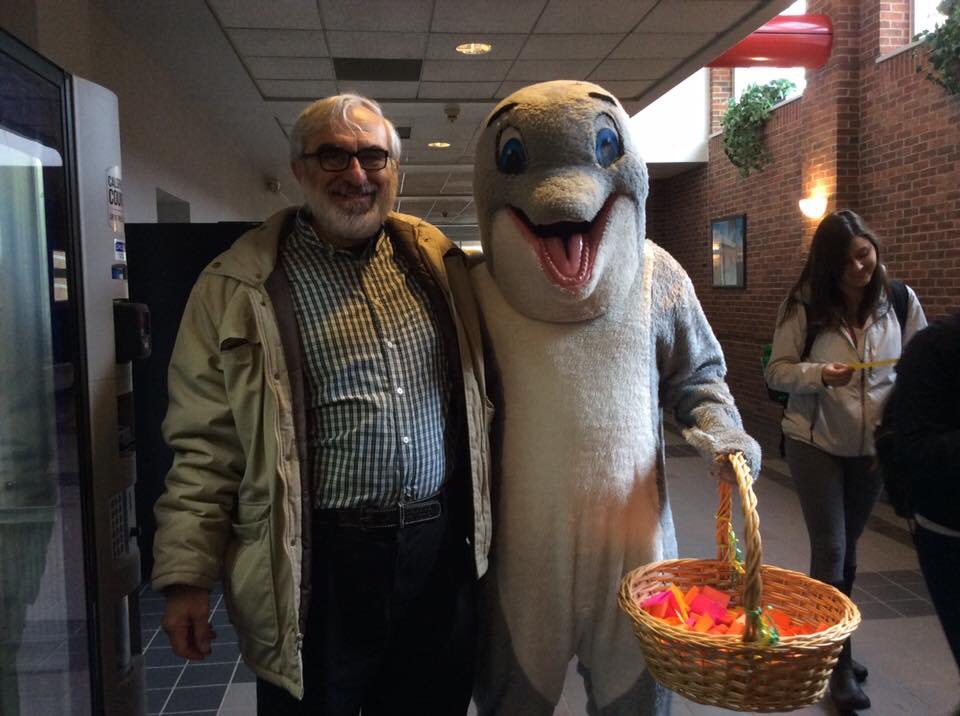 September 3rd was a dreary day, rainy and gray, to match the mood of Le Moyne campus. The afternoon before, news had been received that Father John Bucki, S.J. had passed away at the age of 67 after a long battle with lung cancer. The news sat heavy in the hearts of all members of the Le Moyne community and likely will for a long time to come.

Father Bucki has been a member of the Le Moyne family since 2012, when he came to serve as Director of Campus Ministry. Before that, he spent eleven years at Canisius College as the Director of Campus Ministry and was an associate pastor at St. Francis Xavier Church in New York City from 1988 to 2000. Though only at Le Moyne for five years, he was a shining beacon to all who knew him. Even those who did not know him well knew how much love he had for the community here on the Heights.

Father Bucki was also the incredible advisor for the campus’ Fusion Club. Fusion is dedicated to games, movie nights, and Nerf wars, and Father Bucki always went out of his way to be in attendance. Even when his health started to fail, he always made sure to be present at the many events, taking photos with his trusty iPad. Despite his exhaustion, his energy and excitement still brightened any room.

Le Moyne 2017 grad Meredith Cuddihy is the founder of Fusion Club and fondly remembers Father Bucki’s many contributions to the club. He is the reason Fusion Club has the funding to throw their annual Classic Halloween Party. She also remembers his deep love and acceptance of all students, shown by his eagerness for all campus events, including the Annual Drag Show.

“One of my favorite memories was watching Monty Python and the Holy Grail at Fusion and having Father Bucki join us.” Cuddihy said in an email to all current Fusion members. “The movie has a lot of satire poking at Christianity (Theology minor here) and he still joined us for laughs. That moment was when I realized that he wasn’t someone that would avoid events that made fun of him, but that he wanted to be there for the students.”

A special Memorial Mass took place at 7pm on September 3rd. Students, faculty, and other members of the community gathered to celebrate the life of Father Bucki. Father Kirby presided over the mass, comparing Father Bucki to running water, something pure and full of life. By the end of the mass, there wasn’t a dry eye in the Chapel.

Moving forward, we’ll all be keeping Father Bucki close to our hearts and I believe we should all try to live by his example, greeting every single day with open arms and boundless enthusiasm. We will remember Father Bucki’s big heart and passion for life, and strive to follow in his footsteps.

Le Moyne is a special place. Father Bucki saw that. I see it. We take care of each other here on the Heights and the outpouring of love and support has been overwhelming these last few weeks. If you or anyone you know is struggling with this news, please do not hesitate to reach out to the Campus Wellness Center. Counselors are always available for appointments if you need help working through your grief.

Le Moyne will be offering arrangements for Father Bucki on Friday, September 15th and Saturday, September 16th.  Calling hours will be held on Friday from 3 to 5p.m. and 7 to 9p.m. at the Panasci Family Chapel, and the funeral Mass will take place on Saturday at noon in the Chapel.