I Will Not Go Away 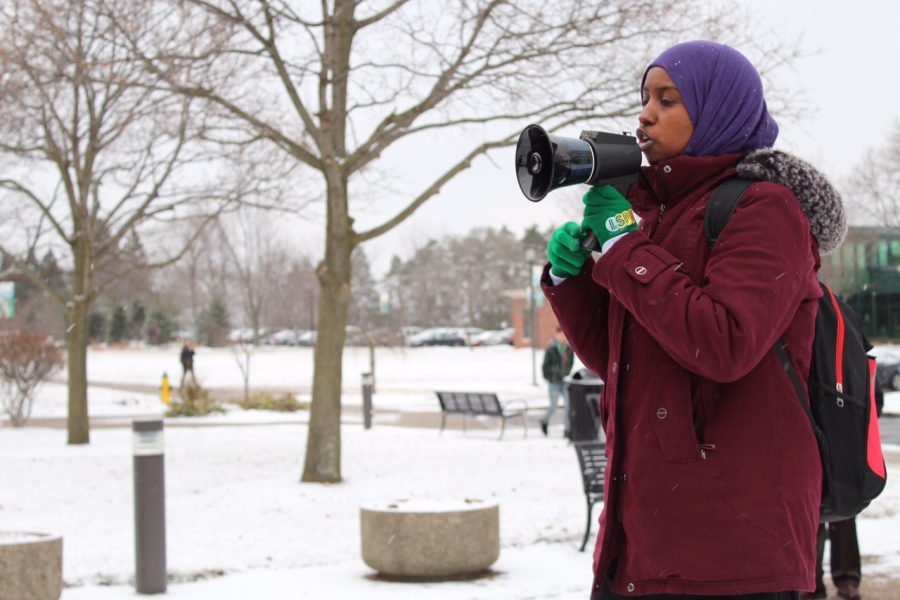 It started as a group message between friends, a way to get their frustrations out about President Trump’s executive order that temporarily barred refugees and suspended visas from seven majority-Muslim countries: Iraq, Syria, Iran, Libya, Somalia, Sudan and Yemen. After a few exchanges, telling their family immigration stories and voicing their contempt, the conversation quickly morphed into movement. The friends started brainstorming ways to show their support for Muslims, refugees and immigrants.

Later that night on Jan. 29, nine students gathered in the Harrison penthouse to plan out a week of events to show Le Moyne, which has a decent refugee and Muslim population, much like Syracuse, will not stand for the immigration ban. Seeing as Le Moyne is no stranger to political protests, the students decided on a demonstration to take place that Tuesday. In an email circulated throughout campus, the students urged the Le Moyne community to take a break from whatever they were doing at 3:30 p.m. and join them in front of Grewen with signs and their voices to stand in solidarity. 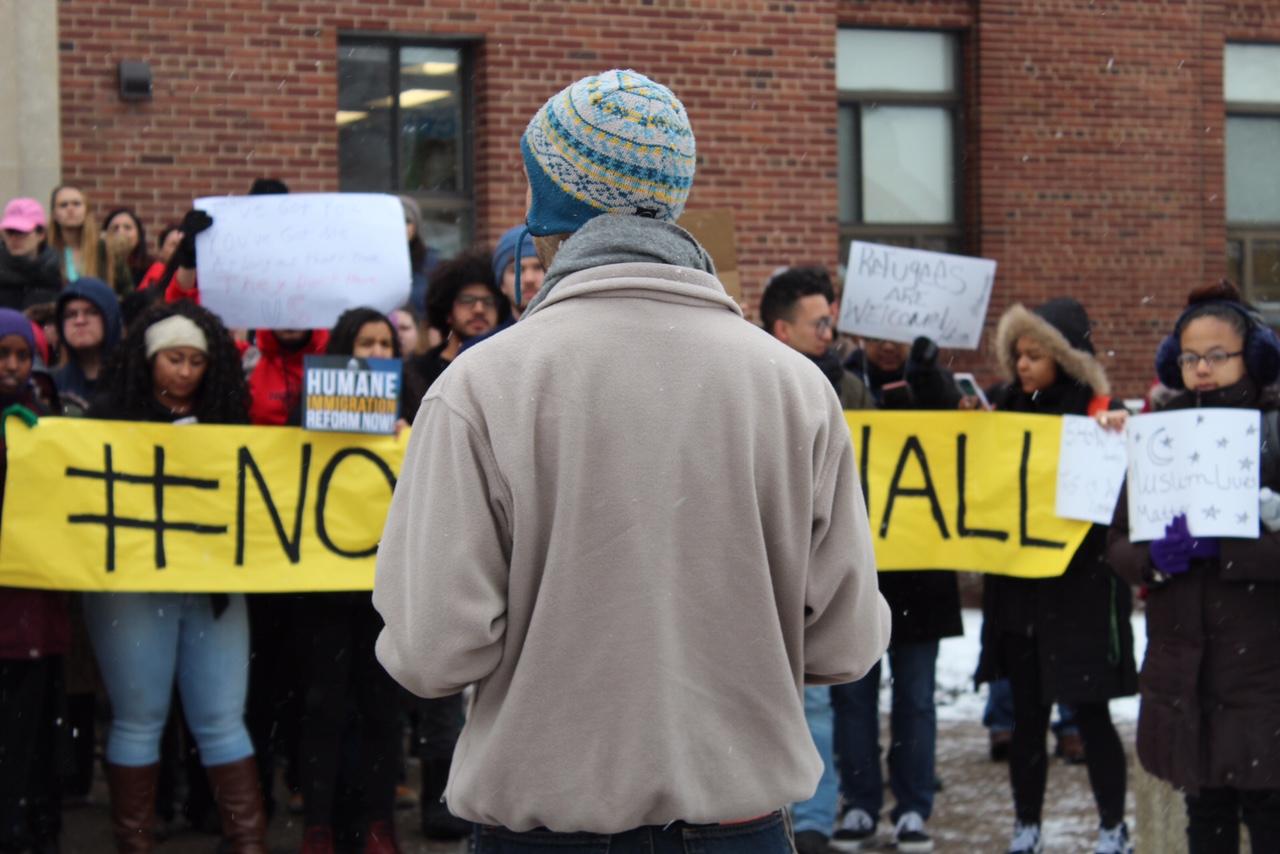 Around 50 Le Moyne students and faculty members rallied together in 30-degree weather to make sure they were heard in some capacity. This demonstration didn’t seem to garner the same attendance as the one formed by Le Moyne students after Mr. Trump’s inauguration, but there was something more personal about this one. It wasn’t people gathered in sadness and fear of what may be, but people gathering because those fears were now happening and the realness of a Trump presidency was sinking in.

What also separated this protest from the one held in November was that some people had the opportunity to address the crowd, to tell them their refugee and immigration stories. Sophomore Psychology major Fatuma Bile was the first to address the crowd with her refugee story, one that started in Somalia and brought her to the sanctuary city of Syracuse.

Bile was 12 when she came to Syracuse with her family in the winter of 2008. Her family had always heard of America being referred to as the “land of freedom and refuge for all,” so they went through the process with the office of the United Nations High Commissioner for Refugees [UNHCR] to gain acceptance into the United States. She said it was a long wait, but once their application was accepted they were assigned to Syracuse.

“My family was more than happy to be here after fleeing Somalia during the Civil War and running from one refugee camp to another, finally settling in Kakuma, Kenya,” said Bild. “Life was hard and opportunities were very limited, so America was the only answer.”

Bile said she felt as though her better life in America had died a little after watching the election of Mr. Trump; but after his executive order it felt as though her legs had been cut off and people were trying to take away her voice. Praying helped to give her strength and she channelled it in a way Americans have been doing for centuries, in protest. “I went with a lot of my friends 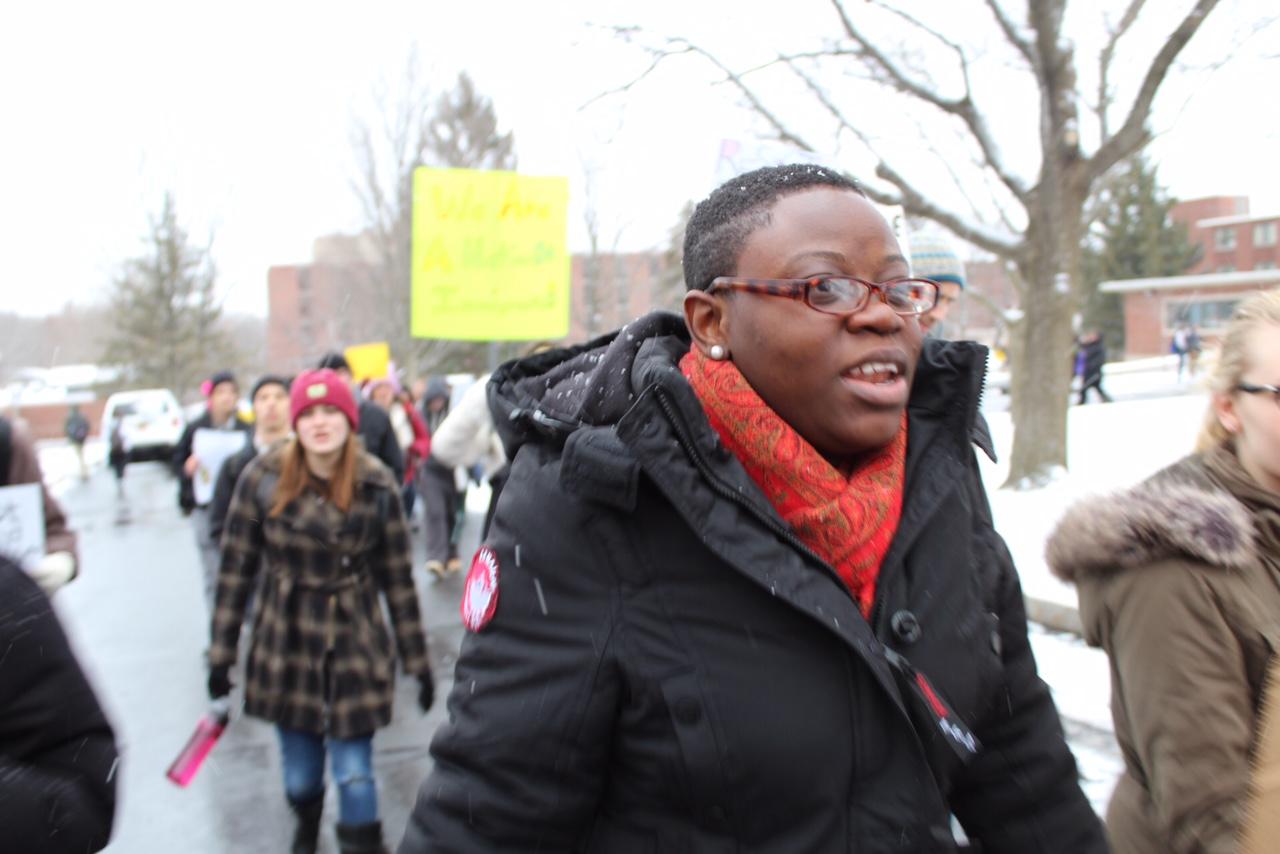 to protest our rage and anger at the airport,” said Bile. “Speaking out is very important, especially when thinking about everyone that depended on me and my family. If I speak out, at least I can let the world know that I exist and that my family and everyone else is unhappy.”

Syracuse has become home, and Bile refers to her time in America as “blissful.” It would be hard to call it anything else compared to what she went through in Somalia. She said one of the best things about Syracuse is that there are so many refugees, people like her who sympathize with each other’s stories and struggles.

Le Moyne has become an extension of the security Bile has felt in Syracuse. She appreciates the effort the college has made to make sure students impacted by the temporary ban know that campus is their refuge, that they shouldn’t be afraid when moving through its grounds. “I know that I am heard. I feel safe at Le Moyne, I can’t complain. It’s not like I have no one to talk to,” said Bile.

There was a subtle confidence to Bile as she stood atop a bench with a bullhorn in hand; not just addressing Le Moyne, but speaking as if Mr. Trump could hear her, making sure she said each word loud enough for his ears. She let him know of her intersectionality, of being a refugee, a woman and an African-American; a combination, that based on his statements and actions, that might make him cringe. Most pungent was her last statement, letting him know that she wasn’t going to go away.

Religious Professor Dr. Elliott Bazzano and junior Political Science major Alice Olom addressed the crowd following Bile, reaffirming that Le Moyne is a welcoming community and that Mr. Trump’s actions cannot be normalized. With that same energy and resoluteness, the throng of people made their way through campus chanting their affirmations, “No ban, no wall” and “No hate, no fear, refugees are welcome here.” On they went, to St. Mary’s and Harrison, past the PAC, the library, the cafe, onto The Plaza and into the streets where they clogged up traffic. It was a random path but one they walked with resolve, and most importantly, together.