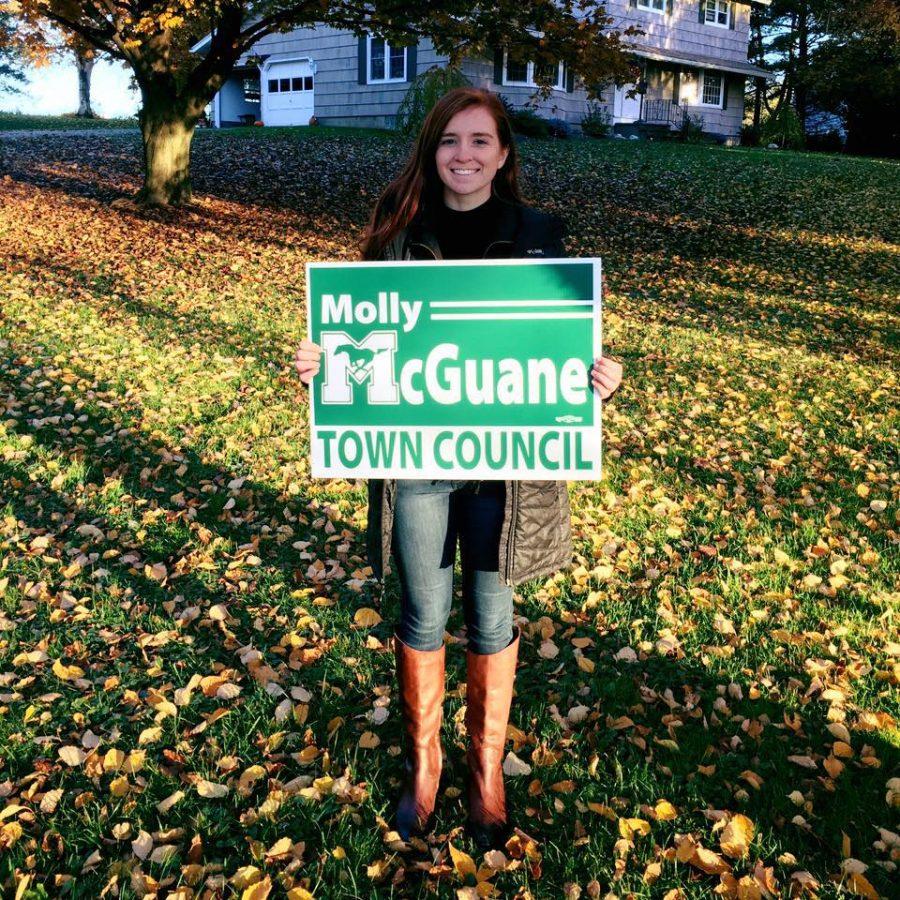 In the midst of nationwide political turmoil, Le Moyne senior Molly McGuane stood up to take action by running for the Town Council position in Marcellus, NY. Unfortunately, on election day, she lost to her opponent, Republican John Cusick. Perhaps more important than the result is the message that McGuane sends to all students: it is never too early to get involved in local politics.

The position up for election was that of Town Councilman/woman in Marcellus, and was to fill the remaining year in a normally four-year position that was vacated and filled by John Cusick, who was appointed to the office. McGuane, double majoring in Communications and English, joined the Democratic Committee in Marcellus and was persuaded by fellow Committee member Nancy Bunn to run for the position in order to bring about a fresh start. Bunn says that she was proud of McGuane for running because “she is a great leader and very mature for her age,” and because she has the ability to “inspire without aggression.”

The responsibilities of the position are mainly that of budgeting and allocation of local resources. McGuane went door to door to get signatures to put her name on the ballot and conducted fundraisers for signs and raising awareness of her campaign.

In regards to specific goals, McGuane says she wanted to approach the position with the “open mind” of a young student in modern America, where most political activity is organized by older generations.

In fact, McGuane says she received support specifically due to her age; people were impressed that she was so young and getting involved. McGuane hopes that she can lead by example to spur other students to action. She wants to be an inspiration to our generation. Especially after the election, which was such an important event in our history and for many of us the first chance to exercise our right to vote. It is more important now than ever that we incorporate ourselves into the national discourse.

McGuane urges fellow students to join committees, to be advocates, and to get involved despite challenges such as contrasting ideologies and party divisions. She insists that the time is now, and hopes the presidential election can be the catalyst needed to spur young people to make change and have open discussion. Most importantly, McGuane tells us to always speak up when we have a chance because our voices are important.

McGuane hoped to make her voice heard by being elected for the position, but despite her loss she intends to continue to stay active in local politics. Her loss was by a smaller margin that she had expected. According to a graphic on her Facebook page, McGuane won 40.47 percent of the votes, with Cusick gaining the remaining 59.44 percent. A roughly 40/60 split is rather impressive considering how Cusick had already temporarily filled the position, so he had the advantage of experience.

McGuane may run again for the same position in a year, but she has made it a goal to always be present in the community and go to more Town Council meetings [held monthly, which anyone can attend], helping to foster change. Who knows, one day she says she may even run for Mayor.

Until then, McGuane maintains the importance for younger people to stay present and interested because we have young voices that matter. In regards to our generation, McGuane’s own words ring with power: “I think we have a certain compassion.” Hopefully we can harness this compassion to become more active in making change.