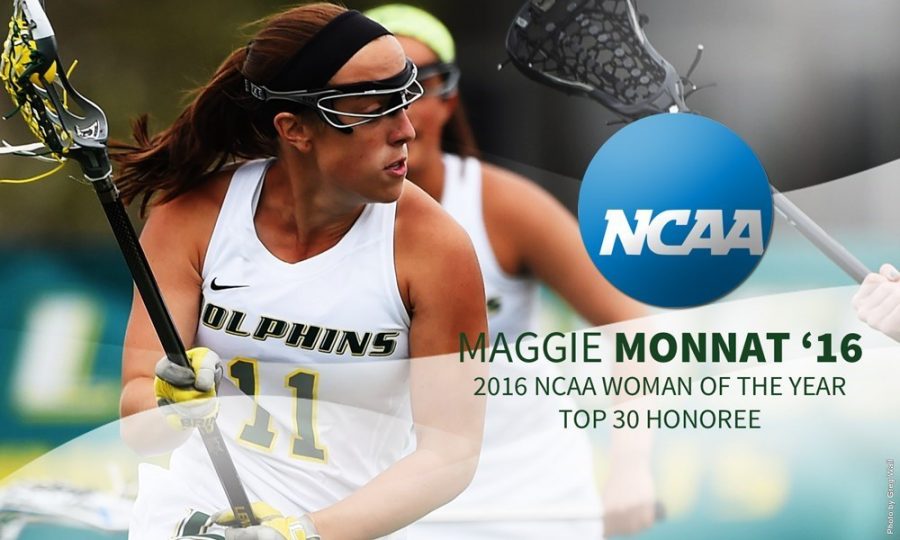 There’s always been something about Maggie Monnat: from her quiet confidence to her awe inspiring altruism. If you were to ask someone who attended C.W. Baker High School in Baldwinsville, NY with her about Monnat, they would undoubtedly say something about her intelligence, athleticism or friendliness. Monnat, along with her twin sister Claire, were far from unnoticeable.

Much of the same affection that followed Monnat throughout high school was transferred over to Le Moyne with her attendance, and it wasn’t unwarranted in the slightest. Although she was known all over campus, the place where she probably made the most impact at Le Moyne was on Ted Grant Field as part of the women’s lacrosse team.

When asked about the honor Monnat, also known for her humbleness, answered, “It’s an incredible honor to be in the running for the 2016 Woman of the Year award. Every nominee has done remarkable things in their sport, in their classrooms, and in their communities, so to be in the company of these women is really special.”

Monnat ended her career as a Dolphin with 235 points on 103 goals and 132 assists over 73 games played [58 starts], while also adding 82 ground balls, 37 draw controls and 31 caused turnovers. Despite all the numbers and all stats, arguably the most impressive thing she accomplished at Le Moyne was the impression she left on her team, the kind of person they will remember her as.

Her former teammate and good friend Jackie Pardee admits she wasn’t surprised when Monnat was nominated for Woman of the Year because she completely embodies its spirit.

“As a player, Maggie was tenacious and relentless. As a teammate and leader, she was what every successful team needed—someone who could tighten the reins when needed in a respectful and inspiring way, and also had the ability to keep things light and fun,” said Pardee. “I was ecstatic that Maggie was getting the recognition she deserved for being the the wonderful person that she is.”

Her head coach Kathy Taylor said that although she only coached Monnat for two years, those years made up quite the experience. “She impressed me immediately with her work ethic and accountability. I also saw in her a leader that others embraced following. We were lucky to have her in our offense the last two years as she contributed so many assists and goals to the overall cause. Maggie was a tough competitor and one I leaned on at times to show the team the way,” said Taylor.

Along with Monnat the team lost five seniors, but they gained 10 new players with the class of 2020. As they prepare for fall ball the team is looking young and searching for new leaders to reveal themselves.

“We have work to do but we return a great cast of players that have Final Four experience and a big batch of freshmen looking to make their mark,” explained Taylor. “They are working hard and seem to enjoy being together…so we have a beginning. Time will tell.”

Return attacker Pardee agrees, acknowledging that losing the seniors to graduation will leave a few holes in the team, but they have a strong foundation and the players that graduated did what they needed to do for the team.

“I think because they were so impactful, the returners have a good idea of how to mirror their leadership and progress as a team,” said Pardee. “Maggie and the other recent graduates left a legacy strong enough to carry a team they are no longer on.”