“It’s On Us”: Joe Biden Speaks at Syracuse University 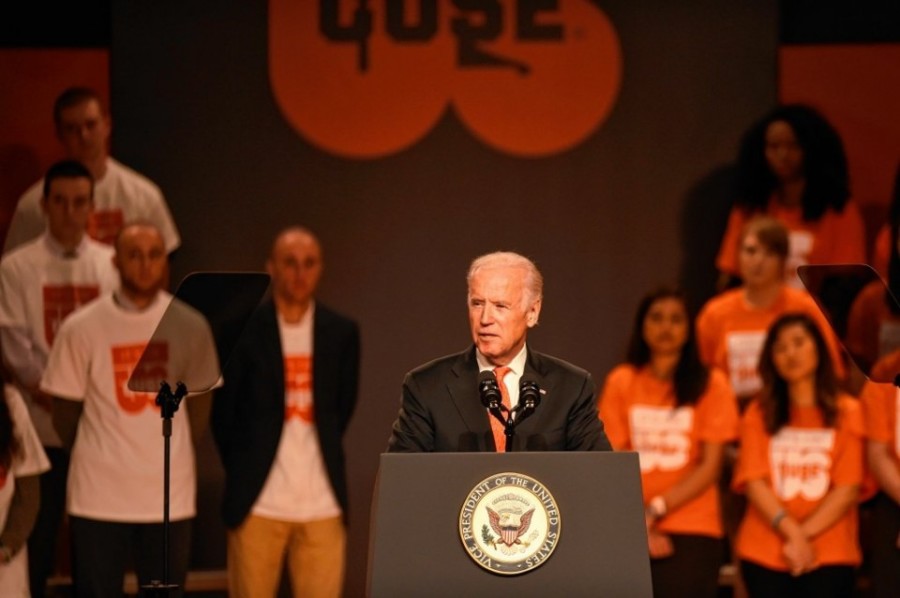 “Everybody can do something. Its up to you to have the gumption to stand up and speak out. There’s no excuse. Don’t look left and right, look in the mirror.”

Biden captivated a full house of students at the Syracuse University Schine Center last Thursday, speaking on the importance of standing up against domestic violence and sexual assault.

Among those in the crowd were 13 Le Moyne students and three faculty members. The tickets were offered through the office of Campus Life and Leadership to Resident Advisors and members of Student Government Association.

The Vice President’s speech was a part of The White House’s “It’s On Us” campaign, that Biden has brought to four other college campuses across the country. However, the sea of Orange that engulfed the Schine Center that night was different.

Syracuse University was once home to Biden, as he is a 1968  graduate of the SU College of Law. Biden’s late son Beau, was also a graduate of Syracuse’s Law. At the event, Biden shared some of his own memories of his time at Syracuse, and his son’s, including an incident where Beau intervened as a bystander to a victim of assault.

Biden made a point to address the male students in the room on intervention and how a bystander should rise to action when witnessing something they know is wrong.

“Look in the mirror and ask yourself, are you living up to the standard that you think is required to be a man,” Biden said. “It’s no one else, it’s you. The real definition of manhood is having the courage to do the right thing.”

In his speech, Biden expressed that college campuses are key environments to eliminate violence against women.

“We need a fundamental change in our culture,” said Biden. “And the quickest way to change our culture is the change on the campuses of America.”

Le Moyne students who attended the event described Biden as a compelling speaker, acting as a voice for victims of violence, not because he has experienced it himself but because he was raised to stand up for others.

“He is an engaging speaker. I was never bored while listening to him because he kept [the energy] going,” said LeeAnne Pedrick. “He has a good understanding for being there for the survivor of the sexual assault and doesn’t ever blame the victim.”

All students and faculty members who attended the event wore Orange T-Shirts that said “It’s On Us,” and were called upon by Biden to make a pledge for the students of their universities.