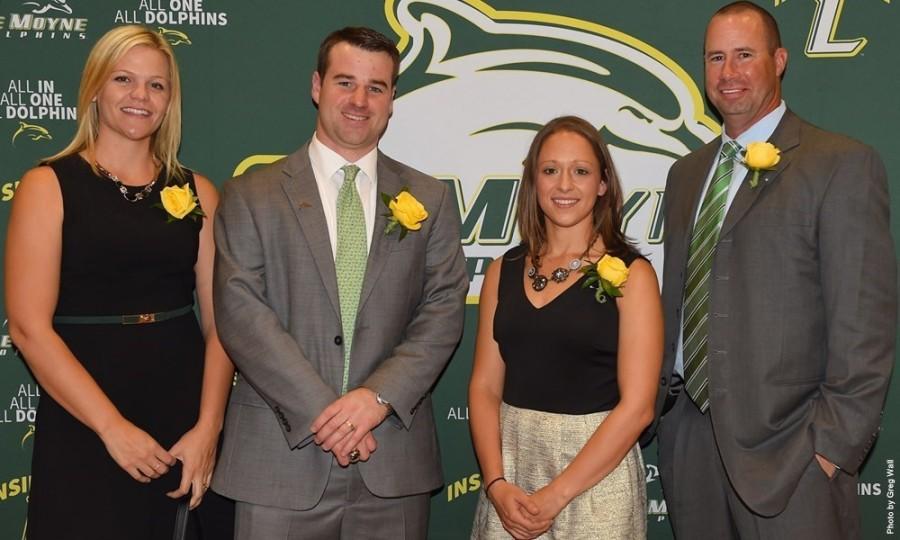 Saturday evening, Le Moyne inducted its newest Hall of Fame athletes. The Class of 2013 was a diverse group of student athletes with impressive records. The newest inductees were Scott Cassity ’98 [baseball], Alison Lesher Migonis ’08 [women’s swimming], Brandon Spillett ’05 [men’s lacrosse], and the 2003 Women’s Softball Team. Marnie Sundberg Schneider ’03 [women’s softball], who was a Class of 2014 Hall of Fame inductee, was also formally inducted with with the class of 2015.

The ceremony was lead by Duke Donnelly. In honorary attendance were current Hall of Fame members, Le Moyne President Dr. Linda LeMura and several current Le Moyne athletes. Also in attendance were Le Moyne alumni, friends and families of the hall of fame members and inductees.

“Some of you may not know this, but I was a point guard in college,” LeMura said, “What I lacked in height I made up with vigor. So I know what it takes to be a student athlete: the hard work, sacrifices, all the while keeping academics first.”

The 2015 inductees were each introduced and offered an opportunity to speak to the audience.

Marnie Schneider was the first inductee introduced. She was a pitcher on the 2003 Hall of Fame Softball team and was inducted into the Hall of Fame independently in 2014. However, her husband Brian, who is a Major in the United States Army was deployed to Afghanistan, so she chose to wait for Brian to have a chance to attend the ceremony. Brian is also an alum of Le Moyne and played on the men’s lacrosse team.

Schneider reflected on her time at Le Moyne as both challenging  and rewarding.

“Many people don’t know how difficult it was, I had several injuries, had to keep my grades high, and still perform, then I had a death in the family,” said Schneider. “My coach and my team were everything to me, they were like my family, they got me through some of the hardest times in my life, they gave me the strength to persevere. Softball was my one love, the one thing I could turn to and just give it my best to achieve something.”

Marnie finished her college career as the most accomplished pitcher in the history of the softball program and was the first Dolphin to receive NFCA All-America honors.

Scott Cassity of Liverpool, NY  is currently the head coach of Le Moyne’s baseball team. Cassity was a pitcher who went on to play professional baseball for 10 years after college. He played with the Toronto Blue Jays, San Diego Padres, and Boston Red Sox. While at Le Moyne, Cassity completed 18 games, with 14 wins, 3.44 earned run average, and 153 strikeouts. His completed games were the second most in the program’s history, and he was only the second Dolphin to start in 29 games.

Cassity’s time as a student athlete did not come without adversity and neither did his time in the professional league.

“At one point I was going to quit, and I told my wife, ‘I think this is it, I think it’s time to hang up the glove. It’s just not fun anymore and I am not getting the job done, everything I throw gets hit out of the park’,” he said. “And she told me, ‘okay, just finish this season and we can talk about it, just go out and have fun’, so I finished off the season. At the end of that season I got MVP. It was one of my best seasons ever.”

Alison Lesher was the only individual national champion in the history of Le Moyne College and the first student athlete from the swimming and diving teams to be inducted into the Hall of Fame. In 2008 she set a school record of 2:01.66 in the 200-yard butterfly. She was also the second to win a national title of all the students athletes in the history of the Northeast-10 Conference for swimming. Lesher received the most awards in the history of the swimming program, she was a five-time All-American and she captured gold at the 2008 NCAA championships. In the 2006-07 season, she was named Conference Women’s Athlete of the Year for swimming. As a Dolphin, she won 10 conference championships in the Northeast-10 Conference. In addition to her athletic accomplishments, Lesher received the Presidential Scholar Award for all four years at Le Moyne and was on the Dean’s list for all eight semesters.

Brandon Spillett scored two of the most memorable goals in the school’s history of lacrosse. He was the third member of the men’s lacrosse program to be inducted into the Sports Hall of Fame. Spillett’s goal at the 2004 championships gave the Dolphins their first national championship title. Because of that victory, the Dolphins became the first Northeast-10 Conference men’s team to capture a national title. Brandon finished his career with 58 games, 185 points with 112 goals and 73 assists.

Molly Reagan represented the 2003 Women’s Softball Team, which was the first ever women’s team to be inducted into the Le Moyne Sports Hall of Fame. With 47 victories, the ’03 team holds the record in New York State for any collegiate division. The team finished their season in 2003 with a 47-10 record, and their second consecutive NCAA Northeast Regional Championship after recording three straight shutouts. Both the head coach, Ken King, and the assistant coach, Ed Mahar, won the NFCA Northeast Region Coaching Staff of the Year award. Senior, Marnie Sundberg, was named the Region’s Most Valuable Player. Freshman shortstop, Jennifer Winters, was the NFCA All-American Second Team.