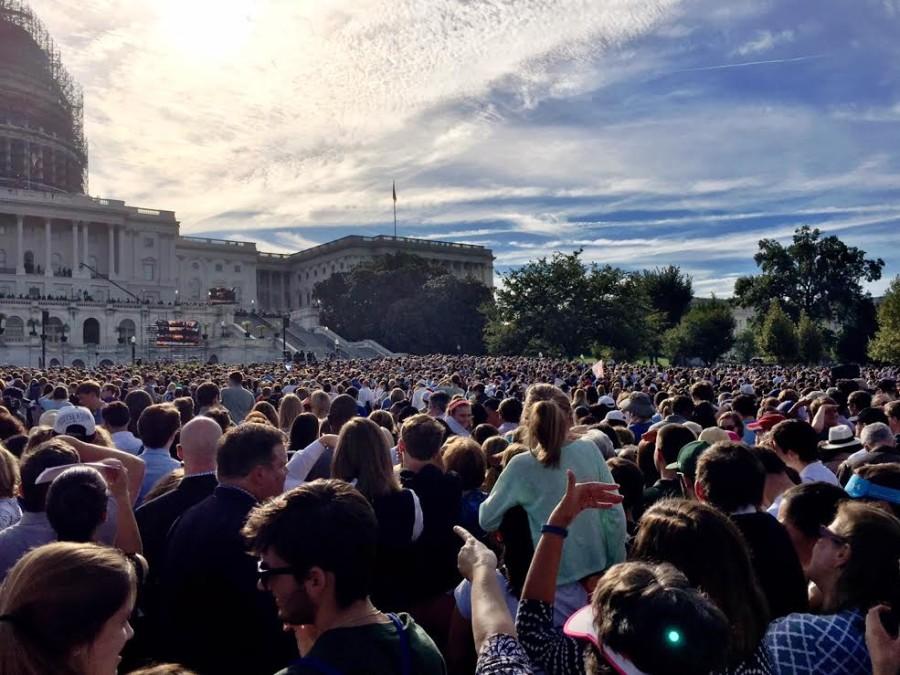 Washington, D.C. — Amidst a crowd of approximately 50,000 people, 45 Le Moyne students stood on the Capitol’s West Lawn on Sept. 24 to watch history in the making, as Pope Francis became the first Pope to ever address a joint session of Congress.

Quiet is not a word typically associated with a crowd of this magnitude, but as Pope Francis took his position in front of Congress, 50,000 people fell completely silent.

“I am most grateful for your invitation to address this Joint Session of Congress in ‘the land of the free and the home of the brave,’” Pope Francis began. While outside, thousands of people struggled to get a better view of the jumbotrons erected specifically for the occasion.

In his papal message — the longest speech the Pope has ever given in English — Pope Francis urged Congress to work together to resolve society’s most urgent issues in a slow and gentle tone.

He talked about immigration and environmental stewardship; he emphasized the importance of each human life and evoked expressions of surprise and disbelief when he called for the abolition of the death penalty.

After addressing Congress, Pope Francis emerged onto the Capitol balcony to address those on the West Lawn.

In his brief remarks, he asked the crowd to pray for him and his mission, saying, “If there are among you, any who do not believe or cannot pray, I ask you please to send good wishes my way.”

Onlookers erupted in applause and Pope Francis re-entered the Capitol, vanishing from the crowds view.

“It was truly an inspiring moment and a once in a lifetime experience that I will never forget,” said senior Angela Tommasini. “I am extremely grateful to Le Moyne for making this opportunity possible.”