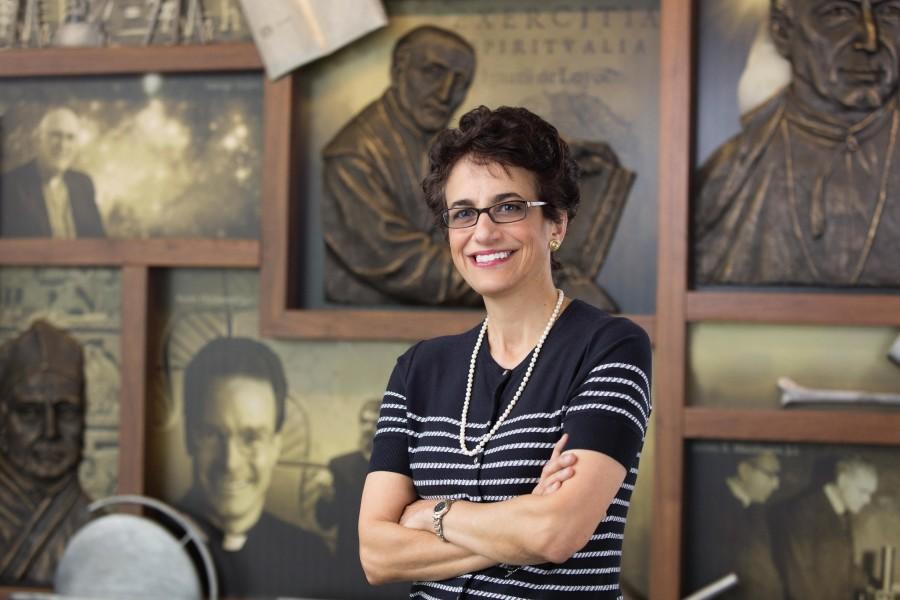 There was nothing short of pure praise for Dr. Linda LeMura as she was officially instated as Le Moyne’s 14th president during her inaugural celebration.

“Linda is able to enjoy the conversation, the noise, but she’s also able to listen to the quiet,” said Dr. Thomas Brockelman, interim Provost and Vice President for Academic Affairs. “She’s able to sense untapped potential and unspoken possibilities.”

Ted Grant Court was filled to overcapacity last Friday afternoon on March 20, as over 1,000 people came to witness LeMura get inaugurated. So many were in attendance that numerous onlookers were forced to stand, witnessing the event from the back of the gym. Amongst those in the crowd were government officials, members of the clergy, students, staff and alumni of Le Moyne.

Senior Anthony Rufo called the ceremony a combination of serious, funny and historical; saying that every speaker provided great insight on LeMura’s accomplishments and what her installation as president means to not only this Jesuit college but all Jesuit institutions.

“I was honored to be there to witness the inauguration of our new president of Le Moyne, especially since she is the first woman lay president,” said sophomore Marisa Duval. “To actually be sitting there in the audience and witnessing it in person was very cool and something I will remember for a long time.”

A common thread shared throughout all of LeMura’s greetings, besides her making history and excelling at basketball, was their mention of her innate sense of community and genial spirit.

“She is someone who values people above all else and understands that our college is first and foremost made up of individuals, each with their own unique goals and talents,” said senior and SGA Comptroller, Steven Siano.

LeMura believes in not only a Jesuit education, but a Le Moyne education; accrediting the school for giving opportunities to those who dream of access to “the riches of culture and the benefits of hard work; it invites student to live lives of service, faith, intellect, and integrity.”

From student response to LeMura it is evident that many agree she is one of the greatest assets to Le Moyne. She is a constant advocate for students and makes sure their voices are heard through forums, meetings with students groups and casual conversations in the hall.

“One of my favorite things about Dr. Le Mura is how actively engaged she is with the campus,” said junior LeeAnne Pedrick. “She’s not a ghost on the sidelines running the school from afar, she’s a familiar face on campus every day working toward making Le Moyne better.”

Now that Le Moyne is formally in the hands of LeMura, many are intrigued to see where she will take the college.

Sophomore Christina Humbert said, “I think her ambition, faith, and character will lead the college to success that will pave the scene for more women to take power at colleges and universities.”