The direction of Dolphy Day draws concerns among faculty, alumni 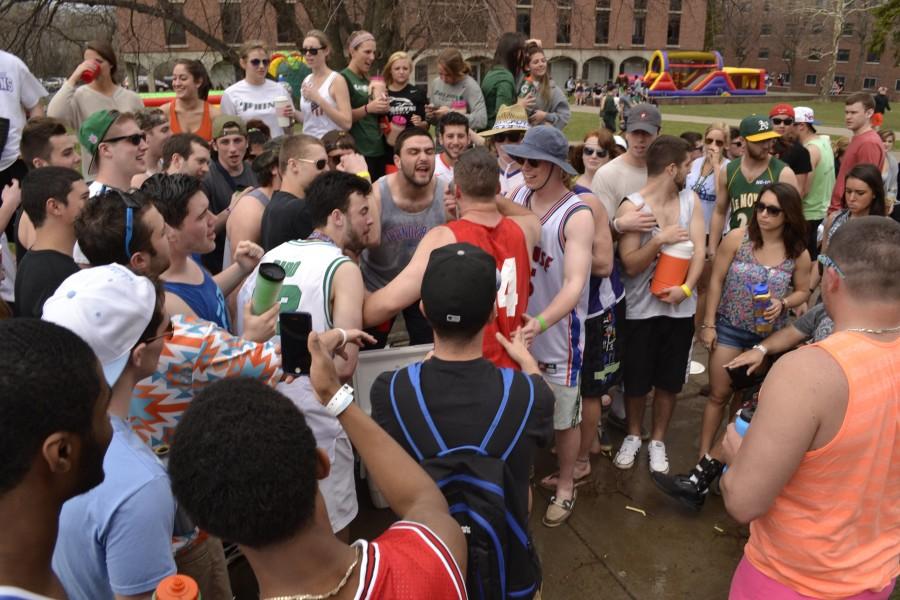 Fireworks and tiki torches lit up the campus at 3 a.m. Bright shirts and duct-taped containers filled the quad by 10 a.m. Dance parties in front of WLMU’s radio station stand broke out at noon. At 2 p.m., a competition of drinking beer through a plastic baseball bat and spinning around before trying to hit the ball broke out, while spectators laughed at those who attempted and fell to the ground. Students dove to the ground to grab loose volleyballs, and dodged footballs being thrown overhead. At 5 p.m., the campus was cleared, with plastic bottles, wrappers, and the dug up ground as the only evidence that a day-long party had just taken place.

But Dolphy Day this year wasn’t fun and games for everyone. Several faculty, local Syracuse residents, and even alumni from the college’s first Dolphy Days had a fair share of complaints about the direction the tradition is taking with each passing year.

Some believe Dolphy Day is making a turn for the worse, as the day  has turned away from its roots as a student rebellion against administration, and become more of an event that is fully supported and endorsed by the college.

“I have opposed Dolphy Day since the first year I started teaching at Le Moyne, in 2005. I don’t like that we pretend it’s spontaneous and rebellious when it’s well planned and strongly supported by college offices and staff,” Dr. Matthew Loveland, a sociology professor, said. “If it was an authentic, spontaneous rebellion that got so much participation, I’d actually support it.”

“What current students now know as Dolphy Day is nothing like the original day, and alumni from then will tell you that,” Loveland added.

However, the history of Dolphy Day remains a debate between college administrators and alumni who were present at the first Dolphy Days.

President Dr. Fred Pestello refers to the official college record, Against the Sky, written by Le Moyne professor, John W. Langdon, who writes that the tradition began to join other local colleges like Cornell University and the University of Rochester in having a spring celebration.

“Legend proclaims that a supernatural being known as the ‘Grand Wizard’ came to earth on the eve of that day and made his wishes known to a humble Le Moyne student,” Langdon wrote. “The celebration turned out to be a welcome one for students and faculty alike, and through some sort of occult ritual whose details remain reserved to the privileged few, the student Wizard passed on his powers clandestinely to an underclassmen, who thereby gained the authority to select the date for the following year.”

However, the college’s official account came to question in 2011 when the statue of Eric Dolphy was placed on campus, drawing the attention of many alumni who were present for the first Dolphy Day. Langdon says his account came from issues of the college’s newspaper, but admits he lacked substantial information to back his claims up.

“My purpose in writing it that way [stating, ‘Legend proclaims’] was to call attention to the fact that I really didn’t have any reliable information about the first event,” Langdon said.

And many alumni agree the college’s official account is a poor representation of what the original day was like, including Chris Heffernan [‘73], one of the founders of Dolphy Day, and the first official Wizard.

According to Heffernan, students on campus today wouldn’t even recognize the first Dolphy Day in 1971 if they saw it. There was no wizard. There was no ice cream truck or Sodexo barbecue. There were no caricature drawings or bouncy houses. There were no selfies taken with the president of the college. There was also no Eric Dolphy music playing.

Instead, Heffernan and his friends put speakers blaring music on the roof of Nelligan Hall. When administration tried shutting down the music on one building, they moved it to another. Students gathered outside the area in front of Nelligan, Foery and Dablon with bottles of cheap beer, wine and liquor they bought at a superstore on Erie Boulevard.

“People were confused – students and faculty,” Heffernan said about the first Dolphy Day. “Some students cut all classes, some cut some and some cut none. It didn’t matter. You could participate or not.”

The tradition continued the following year, with Heffernan as the first wizard ever, he says.

According to Heffernan, there was no wizard the first year. Instead, the first Dolphy Day was created by a group of students, including himself and his friends Ed Grant, Bill King and Roger Fox, and those that joined in throughout the day.

The term “wizard” didn’t come until the following year in 1972. Grant distributed flyers across campus in the early morning to let students know it was Dolphy Day. On them, he drew a wizard. From there, the students agreed the term fit whoever was in charge that year.

The title, “Dolphy Day” was named by Fox and King, who were listening to a Frank Zappa song which mentions Eric Dolphy. Fox noted the likeness between the names and the college’s mascot, and it stuck, Heffernan explained.

But Dolphy Day didn’t stand a better chance against administration the second year around, Heffernan says.

“In 1972, the administration went from being confused to pissed. In 1973, they were ballistic,” he said. “The morning of Dolphy Day, I kept running into people, even people I didn’t know, telling me my name was continually being announced over the PA telling me to report to the dean’s office. By the afternoon, they had people looking for me. I had to leave the campus until cooler heads prevailed. I believe that if they had found me, they would have expelled me. Over the next few days, people intervened on by behalf.”

The juxtaposition of the first Dolphy Days against the scene of the campus last Monday morning, which included a catered barbecue sponsored by the college, a DJ and a band, and many professors cancelling class, has rubbed faculty members and alumni the wrong way.

“I believe the day is too disruptive to the educational mission of the college,” Loveland said. “Personally, I find it very disrespectful to the work I and other professors do to prepare courses and work on behalf of all students. Dolphy Day and the scares, and the general distraction they produce, end up disrupting much more than one day.”

Loveland made his thoughts clear on Twitter before, during and after Dolphy Day. He received numerous responses from students and locals, some agreeing, some opposing.

Kyle Ivers, a senior, responded to several of Loveland’s tweets, saying he was making much ado about nothing, namely the fireworks the night before.

“Really sorry about the two small fireworks. Hopefully your tweets will convince Pennsylvania to secure their border,” Ivers tweeted.

Ivers later added that he feels professors can enjoy the day just as much as students, and Loveland was out of line for what he posted.

“I can understand him being opposed to Dolphy Day as some people are,” Ivers said. “Attendance of course is not at all mandatory, and professors are well aware of the possible loss of a class day before it happens, so it’s rare that I encounter a professor who is opposed to it. They work just as hard as the students do, and from what I can tell, many of them welcome the day to relax as well. Its not unheard of to see a few of them on the outer areas of the quad enjoying the weather with the students.”

“Dolphy Day is something – probably the only thing – that brings students together in one place as a community and as dolphins. It’s something students look forward to. Not all students are irresponsible, blackout idiots on Dolphy Day. Some students who don’t drink, like me, and some legal-age students drink responsibly. Your [Loveland’s] generalizations of Dolphy Day are ridiculous. If you don’t support Dolphy Day, don’t go.”

Ivers also added that he feels it was unfair of Loveland to rile up a controversial discussion with locals on Twitter, since Loveland’s tweets were their only source of information.

“As a member of Le Moyne, he has every right to voice his opposition to Dolphy Day to administration,” Ivers said. “However, since he is employed by a very publicly visible institution, I believe that his provocative interaction with local people who have no other source of information about our college was a very unintelligent action.”

Loveland continued the conversation of changing Dolphy Day throughout the day with faculty members over an e-mail exchange of over 40 e-mails.

According to Loveland, some professors said he was taking the situation too seriously and should just let students have their fun, while others agreed the day has become to disruptive, dangerous, and exclusionary.

Lizzy Simmons, a sophomore, agreed with Loveland that the day is designed mostly for those who drink.

She said this year in particular, as a non-drinker, she felt left out because “there were not many activities [for me] to do other than the bouncy house.”

However, it may be some time before Dolphy Day sees any radical changes.

For Pestello, he says he never had any plans of changing Dolphy Day, and he enjoys how the tradition has evolved over the years. He believes the day has evolved into a safer environment for students, as students and administrators work together to create a successful celebration.

“When I came [to Le Moyne], some students were worried I was going to cancel it,” he said. “I wouldn’t want to cancel it. As long as it’s done relatively controlled where people are being somewhat responsible, I think it’s a fun way to celebrate the end of the term and the beginning of spring and summer and the end of a long winter.”

Heffernan agreed, saying he didn’t even expect the tradition to last after he left, and he’s fine with the changes that have been made, as long as students know the truth about the day’s history.

“I think it was inevitable that the administration got involved,” he said. “The original day was our own little protest. I’m not really irritated at all. I’m glad it still happens. I didn’t think it would survive my departure.”

However, Loveland says the adversity won’t stop him in trying to change the future of Dolphy Day.

“First and foremost, I don’t want to cancel it,” Loveland said. “I think it can be better coordinated so that it is less disruptive and more inclusive of students who don’t drink or simply want to fit their classes in while they celebrate in their free time. I know there are students who don’t drink who leave campus, and I talked to some this year who just spent the day studying or hanging out in an empty Dolphin Den. And I talked to one student who said she was made fun of for being in the library. I want students who dislike aspects of the day to speak up too because their voices and concerns are as important as mine. I want those who like the day, be they current students, faculty and alumni to let us all know what they value about the day. I do believe it will change because it has changed a lot since its beginning.”

“Basically, I want to make it clear that I don’t like what Dolphy Day is in practice,” Loveland added. “If it was anything like I understand its origins, and students took real risks to skip class and blow off the day, I’d blow it off with them.”