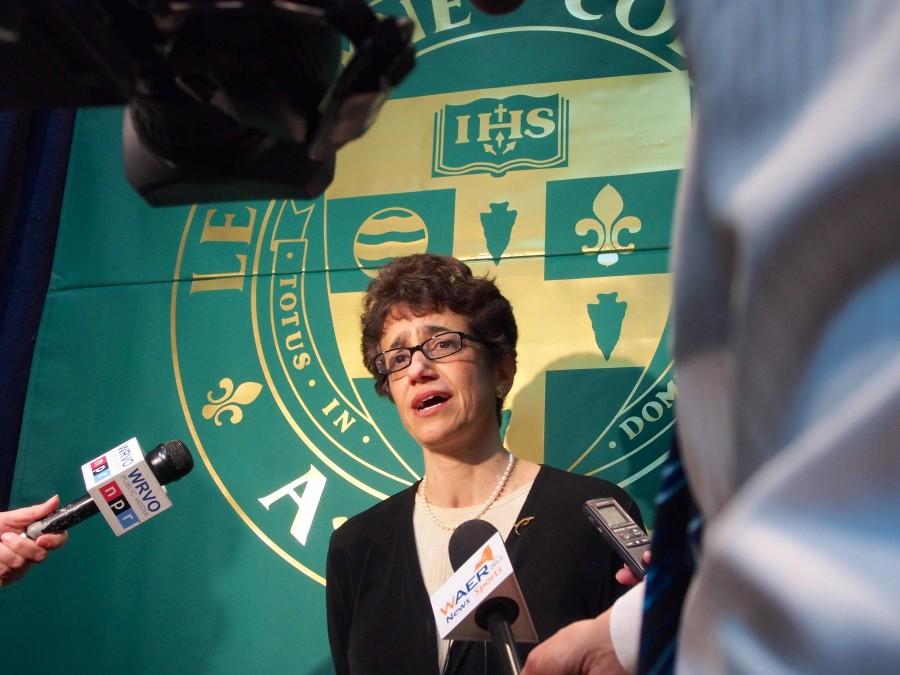 On July 1, 2014, Le Moyne College will have a new president, and a new future. And more than just the Le Moyne community has noticed.

The entire world was watching when the Le Moyne College Board of Trustees unanimously elected Dr. Linda LeMura as its new college president last Thursday, April 3. Local, state and national news outlets praised LeMura and expressed their confidence in her abilities. Cardinal Timothy M. Dolan, New York state’s archbishop, wrote a letter to LeMura congratulating her and wishing her the best of success. The president of the Association of Jesuit Colleges and Universities, Jesuit Father Michael Sheeran, responded to LeMura’s election calling her “particularly esteemed within Jesuit higher education circles,” and that “she comes to the Le Moyne presidency very well prepared.”

But the recognition didn’t end there. According to Sharon Kinsman Salmon, the chair of the college’s Board of Trustees, LeMura and the college have made international headlines as well. So much so, that Pope Francis will issue a statement about LeMura later this week.

But LeMura’s future position as president is dignified for more than just breaking gender roles. LeMura will walk into a position that has already presented challenges for her and her leadership team. On the same day as her appointment as the college’s next president, Dr. Christopher Jones, the college’s current dean of arts and sciences announced he would be leaving for Bradley University. Jones’ departure marked the third administrator to leave his or her position at Le Moyne by the end of this year. To date, the college will have to replace Jones and LeMura’s position as provost before the next school year. The college began the search for an interim dean on Monday, April 7. The Dolphin will provide a full report on Dean Jones’ departure in the next issue.

Beyond leadership challenges, LeMura will also be faced with overcoming nationwide declines in college enrollment, raising funds to continue to support the college’s facilities, and carrying on a Jesuit tradition, despite being a lay president.

College enrollment nationwide has been sinking since 2012, and Le Moyne has not been immune to the trend. According to the U.S. News Report, about 300,000 fewer students enrolled in college this past fall, compared to 2012. At Le Moyne, enrollment dropped from 639 in 2011 to 521 in 2012. Le Moyne made a comeback in 2013, bringing in 622 freshmen, but will continue to face recruitment challenges in the coming years.

LeMura will also have to follow Pestello’s lead in bringing in big dollars for the college. During his tenure, Pestello raised the endowment from $46 million to $131 million, and completed $75 million worth of renovations on campus.

Moreover, LeMura will have to face the naysayers who had hoped the college would return to having a Jesuit for its president, and those keeping a close eye on her as the first female lay president at a Jesuit institution.

On Tuesday, April 9, LeMura agreed to a Q and A conversation with The Dolphin to explain how she plans to take on the coming challenges.

Q. How are you feeling now that the election as president is official, knowing all eyes are on you?

A. It’s a combination of feelings. It’s exhilarating, really, the prospect of serving as president of Le Moyne. I’m a bit anxious to get started. I have a lot of ideas and aspirations for the college and I want to begin; but I will be serving as provost until June 30, so we do have a few weeks before I actually begin.

Q. It’s not just LMC and the surrounding community that have noticed you take office. Pope Francis is watching you and will be issuing a statement about you and the college. What’s that like? Is it energizing or nerve-racking?

A. It surprised me to say the least that the pope is aware. On the one hand it’s exciting to be the first in anything; on the other hand it’s a little daunting because you know people will be watching to see if there are any differences in leadership style. But it’s a wonderful thing for Le Moyne, in part because it was the first school to open as a co-ed school, and now here we are again with another first. And I’m hoping that as a result of me being named president that other boards of trustees at other Jesuit colleges won’t think twice about it. These boards will hopefully select the best candidates for the job, regardless of gender. That’s the goal.

Q. You’ve been at Le Moyne much longer than the average administrator. [This is LeMura’s 11th year with the college.] Why have you stayed so long?

Q.  Le Moyne set a precedent for Jesuit institutions by appointing you as its first female president. How do you think that makes prospective high school students view Le Moyne and its leadership team?

A. I think it shows students that Le Moyne is an institution that takes opportunity seriously. It’s a college that values all voices at the table, all forms of talent, and nurtures talent regardless of categories. And it invests in people and in their future. And I think that’s exciting for high school students to know that that they could attend a school that seriously considers the abilities of all individuals.

Q. Many students were hoping for the college to go back to a Jesuit president, and many students are looking to see how you will take on the role as a lay president. How do you plan to keep the Jesuit tradition, even without being a Jesuit?

A. It’s important to note that the Jesuits themselves are very supportive of lay leaders, and they see it as an important partnership, particularly because there aren’t as many Jesuits as we wish that we could have. And they might not be able to assume all of the roles that they had in the past. They also recognize that there are lay leaders who take the Jesuit charism very seriously and will go out of their way to cultivate it. Also in my own case, I’ve done the spiritual exercises; I’ve participated in many Jesuit leadership seminars; and I’m always learning about the history and the tradition of Jesuit education. So even though I’m not a Jesuit myself, it’s certainly a part of me and it’s something that I take very seriously and will be sensitive to when I lead in the future.

Q. You said at the press conference last week that you don’t plan to live in the president’s house. Why is that?

A. First of all, I have a family home, and I very much want to live in the city of Syracuse. For my own personal style of leading, I think that it’s important for Le Moyne to have its president reside in the city in light of the fact that there is a strong history and tradition of Jesuit institutions being embedded in the fabric of the city [that they are in], and I want to make a linkage with that particular tradition and heritage. And also, it just fits with the way I hope to lead in the future; I want to emphasize an investment particularly in faculty and students. Not that living in the suburbs precludes me from that, but I want the focus to be precisely on the academic mission of the college, and I’m able to do that by living in my current residence.

Q. Will you continue to work in your current office [located on the third floor of Grewen Hall]?

A. That’s something I’m currently discussing with my colleagues. On the one hand, I would like to stay here [her current office], but then if I do, the incoming provost won’t have somewhere to go; there’s always this domino effect. On the other hand, I plan to be on the road a lot, hopefully raising resources for the college and also meeting with alumni. With that being the case, I don’t know that I need that much space; I hate to have it sitting idle while I’m on the road a lot. So it’s possible I may move down [to the president’s office] or another space. But if I do go downstairs, I doubt very much it will occupied solely by the president. It will probably be a shared space because we’re [administration] very tight here.

When Pope Francis’ statement on LeMura becomes available, The Dolphin will post the full report on this website, thedolphinlmc.com