Le Moyne students team up with HOPE for Ariang 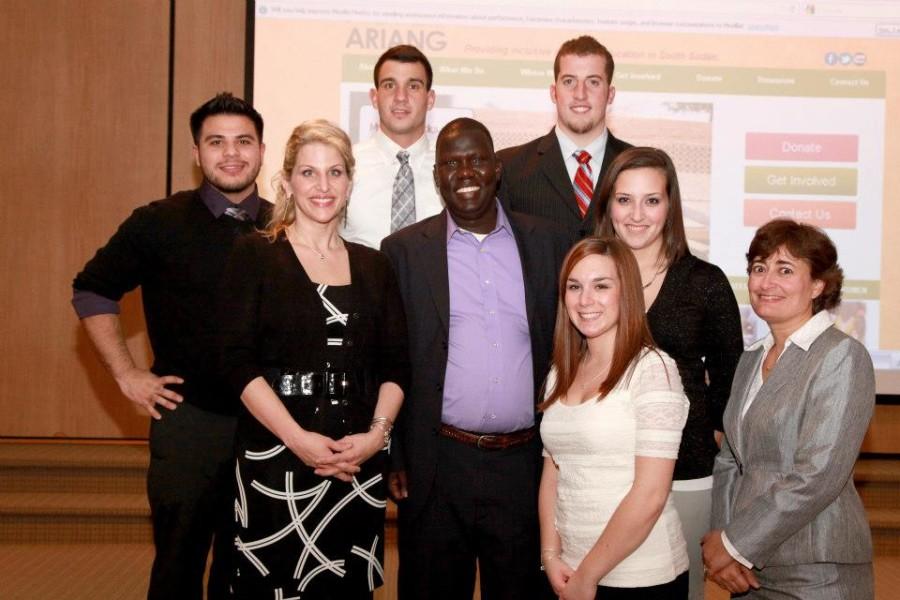 As part of their senior capstone project, five seniors put together an auction on Wednesday, Nov. 28, to raise money for the HOPE for Ariang Foundation “My memory keeps reminding me that something bigger than both of us aligned the stars for us to meet. My husband and I were on the Cape and were just riding along when I spied the craft fair,” it was at this craft fair in Cape Cod, that Kate Artessa, Director of Operations for the HOPE for Ariang Foundation and Holly Christensen the CEO of Dune Jewelry, first met.

Christensen creates jewelry made from beach sand. She uses a technique called “Silver & Sand” that pulls silver and sand together. Artessa realized that this idea could work with other materials. She works with Gabriel Bol Deng, a 2007 graduate of Le Moyne and the founder of the HOPE for Ariang Foundation. Deng is one of the “Lost Boys of Sudan,” he fled South Sudan at age 10. He was inspired to start his foundation after learning to read and write in a refugee camp. The foundation works to provide an education for the children of Ariang. It is the hope of the foundation to educate the children of Ariang and bring about sustainable development in South Sudan.

“I began to think what about using the brick from the school that Gabriel [Deng] helped construct to make jewelry,” Artessa explained.

The villagers of Ariang in South Sudan had made over 350,000 bricks by hand to help build a school in their village. Artessa took a hammer to a brick and sent Christensen a section for her to make the jewelry. As Artessa stated, “Who would not want a piece of that school? Of that dream?”

The five Le Moyne seniors became involved when Artessa and Beng approached Marketing Program Director, Dr. Magdoleen Ierlan to see how they could best partner HOPE for Ariang with Dune Jewelry. Spokesperson for the student-marketing group, Kaycee Mainville stated, “we decided to hold the kickoff event just to really start sales with the pieces off on a great start.” The group consisted of Jeff Gildemeyer, Conor Regin, Jordan Arguleta, and Leslie Bonkowski.

“We looked at several different options as far as what we were going to do for the event,” Mainville explained. “An auction just seemed like it would bring in a lot of support for Gabriel’s foundation.”

“People are so excited that not only are they supporting a good cause, but they are getting a piece of jewelry they can feel good about wearing,” Mainville stated.

The collection created by Dune Jewelry is called HOPE and can be purchased on the Dune jewelry website (http://dunejewelrydesign.com/shop/hope-collection). For more information on the foundation visit: http://hopeforariang.org.