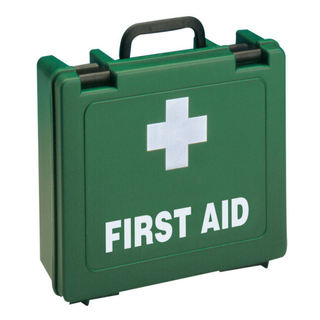 Area man Jeff Baer, 45, was admitted into St. Joseph’s hospital early Wednesday morning after getting hit in the head with a first aid kit. According to the doctor, Baer has a serious concussion and is lucky to be alive.

The incident occurred Tuesday night when Baer was reaching for the first aid kit on the top shelf of his cabinet. Baer’s wife, Frances, found him on the floor of their basement around 5 a.m. after getting home from her night shift at the hospital, where she works as a heart surgeon.  “I heard the TV on in Jeff’s man cave so I went to turn it off and that’s when I found him lying on the ground,” Mrs. Baer reported to the officials.

Baer was looking for a band-aid and Neosporin from the first aid kit. He was shining his bowling league participation trophy from 2006 when he received a minor cut from a jagged edge.

“I like to keep all my trophies clean and in orderly fashion, so when my buddies come over to my man cave they can see how accomplished I am,” said Baer. His trophy collection consists of a blue ribbon from his sixth grade science fair competition, a third place trophy from a barbecue competition he participated in at a family reunion, and a plaque that only reads “Winner.”