Embracing the Joy of Food with Spatchcock Funk 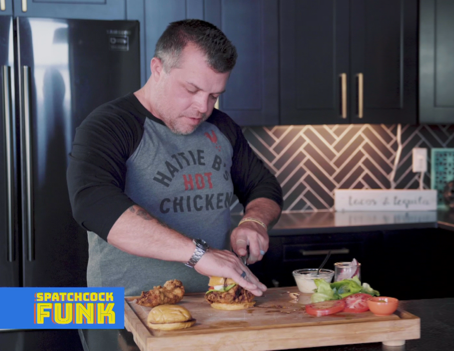 There are three major things that bring people together: “dope food, strong drinks, and great stories.”

According to Le Moyne Professor of Practice, Matthew Read, this statement holds true. It  is also why he never passes up an opportunity to enjoy those three things. They inspired him to pursue Spatchcock Funk. This is an up and coming online cooking show he created less than two years ago along with his good friend, Alex DeRosa, an employee of Syracuse University.

Launching Spatchcock Funk only less than 18 months ago, Read explains, “the show is something that we are really proud of. My favorite thing in the world is teaching and after that is the cooking show.” On multiple accounts, Read emphasized that he only does something if he really loves it, and that he does.

For 20 years, Read has created content for other brands, but has never been an influencer. With more and more students becoming interested in creating their own content, Read wanted to not only teach them a “textbook version” of what it takes to become an influencer, but to teach from experience.

According to Read, this decision has been “gasoline on fire” for his teaching career.

As a YouTube based show, Read and DeRosa have “gained a good amount of traction,” reaching a total of nearly 15 thousand views. They even have a weekly program with the CNY Central, a local NBC affiliate, twice every Sunday morning.

Most episodes change locations from inside Read’s garage, to lofts in Syracuse, luxury hotel rooms, and more. It creates a spontaneous factor for the viewers and helps the brand to make connections with these locations.

“Through our cooking show we have gotten to work with really cool brands—Miss Sydney’s (Barbeque Sauce), Sam Adams Brewery, local restaurant owners, the mayor, and other local celebrities on the show,” says Read. “It is a function of marketing and advertising. We work with sponsors and brands. We generate revenue from people wanting to sponsor our program.”

Representing their brand can be done through the brands they associate with, the food they make, values, and interests.

As an edgy, inclusive, loving, and respectful brand, a big influence on their show has been from “hip hop culture and the black community.”

Read also points out the influence Snoop Dogg has had on himself and DeRosa, both on the show and throughout their lives. The two collaborators have based a select few recipes off of the rapper’s cooking show and cookbook.

The recipes are aggressive: meat forward, a splash of seafood, bacon loving, cajun and creole style dishes. When it comes to their perfect drinks, their style originates from New York City, Chicago and the Blues. A favorite drink of theirs is the Ginny Hendricks, named after Jimmy Hendricks.

This drink consists of: cucumber infused tonic water, good gin, and fresh jalapenos. This creates a drink that is “cool and refreshing and hot and spicy at the same time.”

They test and create everything themselves, Read said, “if it’s not going to be absolutely banging, we aren’t going to make it.”

This is the type of stuff that “if you are either making or drinking it… you’re having fun.”

Read sticks to this claim and follows through with it for every dish created on Spatchcock Funk. More of these original recipes can be found on their website and YouTube channel.

This process does not just happen overnight; preparation for about five episodes takes approximately 25 hours. This does not include two hours of editing, done by Read’s partner.

When the COVID-19 pandemic hit, it became a huge risk to get together to create content. So, they “pivoted” and created a series of video interviews called Spatchcock Nation. The host of the K-Rock morning show and the owner of Digital Hyve are some of those who have appeared as guests on this series.

This was a great, innovative way to continue their show while complying to COVID-19 regulations. This was not only an escape for them in these tough times, but for the audience as well.

Staying on top of his game is what helps Read continue to expand his knowledge and success.

With his vast experience in advertising, public relations, marketing and sales, Read knows how to sell an idea.

From Syracuse to New York City and back again, Read has made his way around the advertising world. Previously he has worked at companies such as Mower, Terakeet, and Digital Hyve as their Chief Operating Officer. Currently, he runs a consulting firm, Royal Punk Android.

In between all of Read’s advertising work, he plays an important role in the Le Moyne community.

While being head of marketing for the Keenan Center (a joint project between the Madden School and the College of Arts and Sciences), the moderator of Advertising Club, and a professor in the Communications and Film department, Read finds time to collaborate with DeRosa to create this hip, authentic, and innovative show.

Keeping busy is how Read stays on point, but it also gives him a reason to hangout with cool people and create memories.

Read expressed, “I don’t want to be 50 years old and wonder, what if?”

Read explains that right now they are in a good spot; a future goal would be to reach a larger audience through streaming platforms or even Food Network. Overall, the two men just want to influence people through their talent and hard work.

Anyone can be an influencer, Read claims, but that person needs to “stand for something.”

So, what is stopping you from pursuing your dreams? Take every opportunity as it comes. There will be an event sponsored by the Keenan Center for Entrepreneurship, Innovation and Creativity on November 10th, 2020 at 6pm.

This is for anyone who is interested in learning about what it takes to become an influencer (blogger, YouTuber, Instagram model/personality). The event, “Stream Yourself: Becoming an Influencer,” will take place over Zoom in conjunction with Centerstate CEO and the Tech Garden.

An email from the sponsors containing more information is coming soon.