A Behind the Scenes Look at Filming The Living 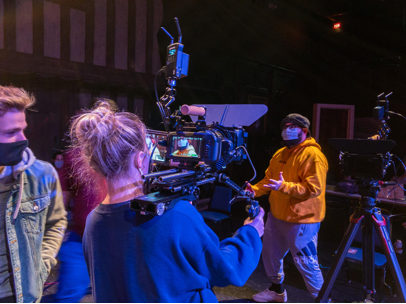 Student Cindy Zych getting hands on experience working with the camera. [Photo by Sebastian Fredette]

Have you ever wondered what behind the scenes looked like for your favorite production? Well, Le Moyne College students shared their point of view from working on The Living, the Performing Arts Center’s fall play.

The show will be available to students and the community online, and on November 7th, at 7pm and 9:30pm, there will be a special premiere on the big screen in Grewen Auditorium.

A lot of work went into The Living; effort from all sides and angles of the production made this performance what it is today.

Literary Manager for the VPA program, Ava Berarducci, is a junior Theatre and Communications major. Theatre is a large part of her experience at Le Moyne College, but it is not the only extracurricular activity on her plate.

This year, Berarducci took on the role as the associate editor for Le Moyne’s, The Salamander. This is a publication devoted to “outstanding poetry, fiction, scripts, creative nonfiction essays, photographs and art by Le Moyne College students.”

Berarducci was the stage manager for the production of The Living. Her role was very important in making sure the process ran smoothly. This show was done in quite the unconventional manner for the PAC.

The Living is about London during the Plague. Berarducci described the show in her own words, “It focuses on the story of a woman whose family dies due to the plague as well as leaders, doctors, and religious leaders during this period. It’s a lot about their struggle and resiliency.”

Due to the global pandemic, COVID-19, the PAC along with many other organizations have had to alter plans and come up with new ways to do what theatre does: perform.

Between Berarducci and other leadership roles’ efforts in making sure everyone was socially distant and sanitizing, there was still the issue of having an audience see all of the work that was put into the show.

So, the plan was laid out as follows: the whole production would be filmed by the Communications and Film Studies Department.

Sebastian Fredette, a junior communications major with a music minor, was one of the many students that worked to make this a success.

As an active member of many other Le Moyne groups and organizations like Fermata Nowhere, musical groups, as well as extra work for campus communications and the chapel, Fredette finds a way to make it all happen effortlessly.

His role on set of The Living was as DP, Director of Photography. This included supervising the cameras and directing students that were responsible for working the cameras.

Eventually, on the third and fourth days of shooting, Fredette took on the role of Chief Audio Technician. When asked what challenges he faced, he said, “every night something new broke…” referring to the audio.

Working with technology is always challenging because it is hard to know if something is going to work correctly, so there was a lot on the line for Fredette.

As he worked to make sure everything was running smoothly, Fredette worried about the “pressure on the one hand of getting it right and then not wasting everyone’s time.”

These are not the only responsibilities Fredette has over the outcome of this play.

He is also one of the student editors through his CMM 337 course taught by Professor Bryan Cole. Fredette alongside Stefon Greene, Creative Media Director for the CMM department, will be working hard on the finishing touches. Making sure that the final audio, coloring and general appearance of the show is ready for the screen in every home and dorm room.

Professor Cole and other students from this advanced film editing class will be working through the month of October to make sure all of the best qualities of this play are exposed for the local community interested in watching.

Overall, this has been a great experience for Fredette; it is something that he “loves to do.” He also claims that “there is no better way to get better at something than to do it…” and as the saying goes, practice makes perfect.

There are other reasons to be a part of something like this production. It is a way to create lasting friendships and connections to the business.

According to Fredette, there is “no quicker way to get to know someone than to work with them for 30 hours over four days.” Others that worked on the set concur with his perspective.

Cindy Zych, a junior communications major with a minor in psychology, was a student that stood behind the camera for three out of the four nights of shooting.

This was an eye-opening experience for her to see how much work is actually put into a production like this one.

She said, “I found it to be very valuable…it seemed like something I might want to do in the future.” Zych has experience in front of the camera and audience as a member of  Le Moyne’s Jazzuits.

However, this set seemed “very professional,” and it made her realize that she may want to lean more toward the production side of communications.

Other students from CMM-332 worked the cameras for this performance as well, all of whom gained a similar exposure to this side of production.

There was work done by many talented people that were not mentioned, and this production would not have been a success if these people were not involved.

With all of their hard work, there is hope within the Communications and Film Studies Department that an opportunity like this one will pop up again in the near future.

It was a great opportunity for all of the students involved and it created connections even in a world that has been disconnected for so long.