The Show Must Go On — Theatre Amidst a Pandemic 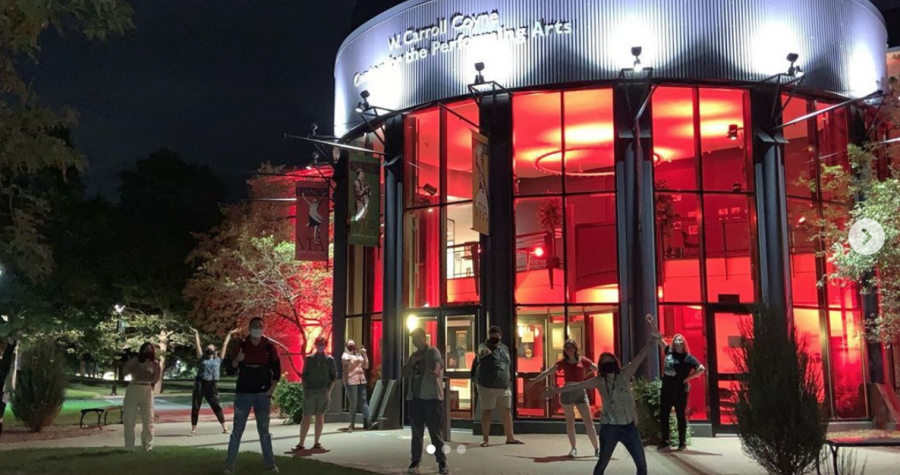 The concept of an audience is so engrained with live theatre that it’s hard to imagine a show with no one there to view it— with no laughter to follow a perfectly delivered line, with no awestruck faces as the lead hits an unexpected high note with ease, with no booming applause at curtain call. Yet, amidst a pandemic, theatre persists. Even with a theatre full of empty chairs, the stage remains a living thing. As long as there is a script and someone to perform it, there is a show.

At Le Moyne, the Performing Arts Center is continuing to put on shows despite the limitations of COVID-19. One platform that is being used to record the performances is Zoom, which is a key component to the production of A Midzoomer’s Night Dream.

Declan Rapp, a junior theatre and computer science major, is the stage manager for the play and thinks Zoom theatre offers different opportunities to students that may not have been available before. “A Zoom show is actually probably as interesting as a live theatre performance, if in different ways,” Rapp explains. “For this semester in particular, a lot of the shows we’re doing are being filmed rather than performed live, and most of them are a combination of Zoom and in person filming. I think this gives students an opportunity to explore the ‘filming Hollywood’ style of theatre that a lot of us aren’t as used to because we’re focused on performing on-stage in front of audiences.”

With this new format, however, comes challenges for tech and stage management, who have to deal with computer issues, photo quality, and problems of the like. In addition to Zoom, they are learning to use an Open Broadcasting Software to broadcast the shows as “live” performances.

Since Zoom narrowly focuses on the actors’ facial expressions, it has been crucial for them to adapt their technique and acting choices from what would be typical in a live performance. “It’s different because we’re not using our body language or motions as much; it’s more focused on the face, which creates a different challenge for the actors. We have to look at the text and the action a little bit differently than we normally would,” says Rapp.

Despite the learning curve that has been essential to restructuring shows to fit an online format, theatre has ultimately made a fairly smooth transition, especially when compared to other industries or professions. Using the examples of healthcare and business, Rapp explains that it would be nearly impossible for these industries to be forced entirely online in the same way that theatre has been. This speaks to the nature of theatre itself: “I saw a little post the other day about how the people involved in theatre are the most resilient because the entire industry has been dying since the Greeks started it,” says Rapp. “You see arts programs being cut across the country, theatres going out of business or scaling back productions, but no matter what, there’s always going to be theatre in some form.”