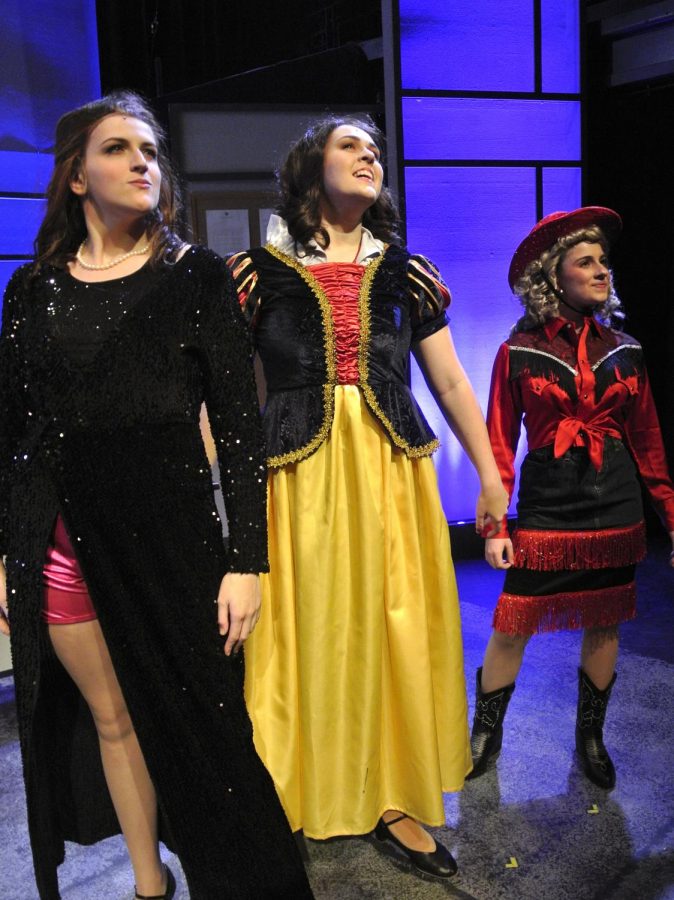 Le Moyne puts on about one musical every other year. So, it’s safe to say that when you see the Le Moyne performing arts center put time, effort, and money into a musical you should really buy a ticket because you just know it’s going to be good. 9 to 5: The Musical was, of course, no exception. Although 9 to 5 is set in the 80’s and the original movie boasted an all-star cast including Dolly Parton, it was incredible to see college students perform it and prove the storyline is still relevant today.
For those who don’t know the story, 9 to 5 is about three women, Violet, Dora Lee, and Judy who kidnap and tie up their “sexist, egotistical, lying, hypocritical bigot” of a boss, Franklin Hart Jr., and then proceed to run his company more efficiently than he ever did. They all have a score to settle with Hart. Violet is a hardworking, widowed mother who becomes fed up when she sees that a man she trained gets the promotion she had been dreaming about. Dora Lee is a tough and attractive woman in the office who becomes rightfully enraged when she finds out that Hart has been telling everyone in the office that they’ve been having an affair. Judy is a new assistant in the office who is tired of Hart belittling her and other women. Judy grows to be fed up with all men in general also considering her husband left her for his young secretary “Mindi with an ‘I’.”
9 to 5 also has great supporting characters. Roz Keith is the amorous assistant who’s is madly in love with Hart and serves as another obstacle for our heroines throughout the play. Joe is the young accountant that helps put the world in perspective for Violet and shows her that she can relax and love again. Maria’s quick termination over something minuscule helps provide more motivation for the women to do something about Hart and in the second act seeing Margaret, a chronic drinker, come back from a rehab treatment implemented by the women, helps tie the show together and emphasizes the drastic change at the office that took place throughout the musical.
Le Moyne’s student actors and actresses are always outstanding. You can tell they all put so much hard work and dedication into the show. Meghan Lees ‘20 played the often-stern Violet extraordinarily well and I also enjoyed the mixture of maturity and sarcastic innocence she brought to Violet in her song “Potion Notion”. Dora Lee, played by Danie Merrill ‘21, and Judy, played by Morgan Smith ‘19, were two of my favorite characters based on their personalities. I loved how Dora Lee was funny, kind, sweet, and tough all rolled into one. Judy’s growth throughout the play, however, was probably one of my favorite things about the show. Her last song “Get Out and Stay Out” (which Morgan killed, by the way) is a far cry from the naive woman we see at the beginning and in the song “Around Here”. I also really liked how Meghan and Morgan would play off their characters opposite personalities, like Violet’s experience and Judy’s unfamiliarity with the working world.
The two main male characters Hart, played by the experienced Tino Laterza ‘19, and Joe, played by Joe Gauzza ‘21, were outstanding in their roles. Tino portrayed the horrible, misogynistic Franklin Hart Jr. in a way that was comical and entertaining but that also made us extraordinarily happy to see him get strung up from a garage door opener and transferred to the jungle in Bolivia. Joe Gauzza’s character Joe was timid, funny and nerdy but amazingly insightful in his second act song, “Let Love Grow” that proved he was still a good match for Violet.
My favorite part of the show (and from the audience reaction I know I’m not the only one) was Roz Keith’s song “Heart to Hart”. Overall, Samantha Overton ‘20 played Roz exceptionally well, providing hilarious comic relief as well as motivation and obstacles for other characters. “Heart to Hart” basically showed us deeper into Roz’s emotions for Hart and the ensemble’s interaction with the audience was hysterical. The song was also aptly performed on stage by Samantha and Tino, as well as other members of the ensemble, that had the audience clapping and roaring with laughter.
Le Moyne’s rendition of 9 to 5 was great and the show got a well-deserved standing ovation. The message of acceptance and feminist power throughout and 80’s set musical was perfect even in the tone of today. 10/10 will see it again.