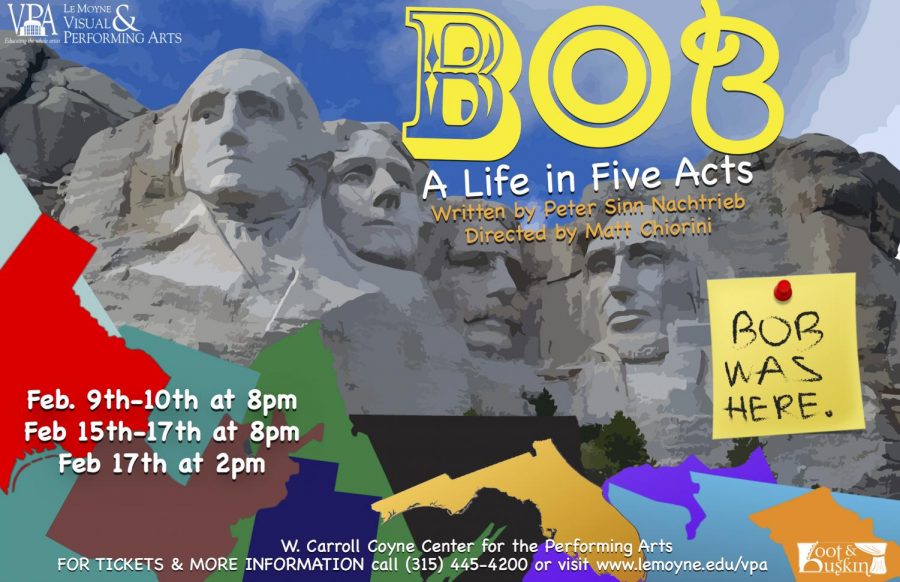 The weekend of February 9th, Le Moyne’s on campus theatre company Boot and Buskin opened their two week run of Bob: A Life in Five Acts. The show, directed by Matt Chiorini, is based on the life of one man named Bob. In act one, Bob is abandoned by his mother after birth in a White Castle. He is then raised by a fast food employee, who tells him he is destined to be a great man. Bob then tries to determine what it truly means to be a great man and how to do it. Where does greatness come from? What does greatness actually mean?

Alex Leblond ‘18, stars as Bob, a unique yet familiar character we can all relate to. Leblond executed this incredibly well, effectively portraying Bob from childhood to old age. He brought a liveliness to the character, creating a relationship with the audience so that they believe and encourage him to continue his life’s journey. He has an incredible ability to captivate audiences and truly connect them to the character. It is this bond with Bob that makes this show so powerful. Everyone can relate to this character and Leblond does an outstanding job bringing him to life. He brings the utmost hope and positivity to a comedic tragedy.

The chorus had the difficult job of playing at least five characters each. They all had distinct personalities, accents, and movements for each appearance. In act five, when they had to represent all their characters in the span of three minutes, the cast did not miss a single beat. They rhythmically changed into each character through quick costume changes. This moment highlighted the fact that a person has such an impact on others lives around them. Fred Pienkoski ‘18 had an incredibly wide range of characters to portray. His shift from a waitress, to a grungy motorcycle rider, to a butler had me astonished. It takes true talent to jump from so many characters and Pienkoski did it seamlessly. As for Kit Kuebler ‘19, her playfulness on stage is a sight to behold. She’s great at going from a serious character to a goofy character. Her ability to bring to life the reality of a young woman’s journey was moving and captivating. She then can switch to a playful wolf in a moment’s time and have the audience laughing and gushing with excitement and awe. Kuebler is such a bubbly actress and I really enjoyed watching her.

The musical talents in this show were also astounding. Kelsey Rich ‘18 and Morgan Smith ‘19 did a wonderful job as assistant directors as well as incorporating ukulele, harmonium, and various other instruments into the show. This dramatic touch helped set the mood of the show and added a flow of emotion to an already emotionally powerful show. Milanne Wischmeyer ‘20  was absolutely phenomenal in both her various roles and her solo music piece. Her strong solo was one of my favorite parts of this show. Maggie Flower ‘19 added so much flair with her acting, singing, and playing of the ukulele. She has a sweet yet soft voice that demands attention. Her comedic and genuine persona added to this show, also adding a positive and calming mood to the musical scene transitions. Jean-Luc Saliva ‘19 has a beautiful and tranquil voice that pulls you in as an audience member. He has a charming and friendly persona that resonates when he is acting as well as when he is singing. Saliva is a multi-talented actor and musician that you absolutely shouldn’t miss. The cast of Bob: A Life in Five Acts are so talented in many ways, truly bringing the characters and scenarios to life.

The technical side of this show was absolutely wonderful. The set, designed by Nicolle Ablan, was simple yet perfect, unlike anything seen at Le Moyne. The set allowed the show to take place anywhere and everywhere and with this show happening in a million different places that worked out well. I especially loved the idea of the map of the USA to be on the floor. It gave the actors something to play with and it was helpful and unique in telling the story. The costumes, designed by Lindsey Quay Voorhees, were made super durable for all the costume changes. I especially liked the waitress outfits: I thought they were super cute and perfect for the characters and the show. Overall, the costumes were simple clothes that didn’t take away from the story which I think really worked here, anything more dramatic would have caused the audience to lose focus. The lighting design for this show, done by Brian Jordan, helped hold the mood. His use of the scrim and lighting both the back and front of it was amazing for telling the story of the show. The lighting effects of flashlights and silhouettes added importance to specific moments and made them stick out in my mind. I loved all the warm lighting, it helped keep the positive feeling even during the darkest times of the play. The use of the projections were also unique. They played with the balance of comedy and serious undertones of the play. They made me laugh and think at the same time which was something I valued.

Bob: A LIfe in Five Acts was one of the best shows I’ve seen here at Le Moyne. It was so hopefully optimistic during tragic events. I think it is a show that we as a society need to see. We need to be reminded that even during dark times in our lives, our nation, or our communities, there is always positivity. We will always have the opportunity to affect someone’s life, and help them get to a better place. I would highly recommend seeing this show. Showings are February 15th – 17th at 8pm with a matinee performance at 2pm on the 17th. Student tickets are available for $5. I hope you will come out and be reminded that even when things seem bad, it will be better; you are not alone.