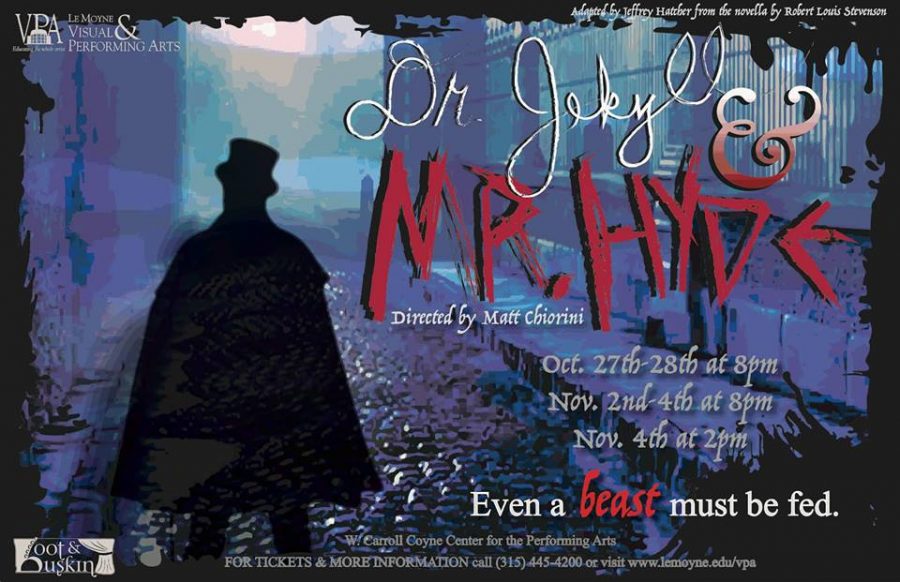 If I had to describe this show in one word it would be dark. From the content to the humor to the costumes to the set to the atmosphere. From the moment you enter the Jesuit theater (in the Le Moyne College Performing Arts center) you notice the dimmed lights and the imposing set, the ominous music that plays sends chills all up and down your spine. There is a fog that lays over the stage, the entire theater really, perfect for a creepy Halloween time show. With tickets at $15 for the general public, $10 for seniors, and only $5 for students, it would be a shame not to go see it. If you are a student, take advantage of the 2 for 1 deal going on Saturday October 28th!

The show is very creepy, and has many technical elements working in conjunction to make it a truly stand out show for the PAC. The director’s choice to have Hyde be played by multiple actors is bold and interesting, really making Hyde feel like a creepy ghost or demon. The make up really emphasizes the twisted nature of Hyde’s character, and cannot be given enough praise. There is also the turntable, a wonderful technical touch, and something not typically used in a Le Moyne production.

The actors move around the turntable with such practice and ease that one might think that they use it in every show (even though this is the first time it has been used in my time here at Le Moyne). This is a show that is greatly enhanced by the technical elements, but not too much. The story is so compelling, and told in a unique compilation of dictated notes and diaries, it is very reminiscent of the book it is based on.

There are quite a few scenes that really stand out to me, but I will not say much on content here (you’ll just have to see the show to get the full effect). From the foreshadowing beginning, to the high intensity “wrong ones” scene at the end of act 1, to the ending; these scenes leave such a mark on the audience that I found myself feeling breathless just watching. The way that the costumes, set, props, lights, and sounds all come together to frame these scenes (and the special effects used to really illustrate some dark subject matter in an artfully creepy way) made my skin crawl and made me excited for more.

Some special notes have to be made for a few little details throughout the show that will really have you wanting to buy multiple tickets. For starters: the aforementioned four Hydes and their costumes and makeup. These actors somehow manage to blend into one character so seamlessly that I had a hard time telling them apart. Secondly, the characters of Dr Lanyon (Fred Pienkoski) and Madame Gabrielle Utterson (Morgan Smith) are really stand out characters that bring just a touch of humor to an otherwise dark and high adrenaline plot. Lastly, the times where characters speak in unison are well timed and always gave me chills.

Overall, I cannot recommend this show enough! It marries great acting with impressive technical aspects which really makes it a must see for anyone this Halloween season. Get your tickets today, before it all sells out! You can call the Box Office at (315) 445-4200, order online at lemoyne.edu/pac or visit the Box Office in person Monday through Friday 10AM-4PM on the second floor of the Performing Arts Center, or 4-7PM (Monday through Friday) in the main lobby of the PAC. Tickets are selling fast, so get yours today!