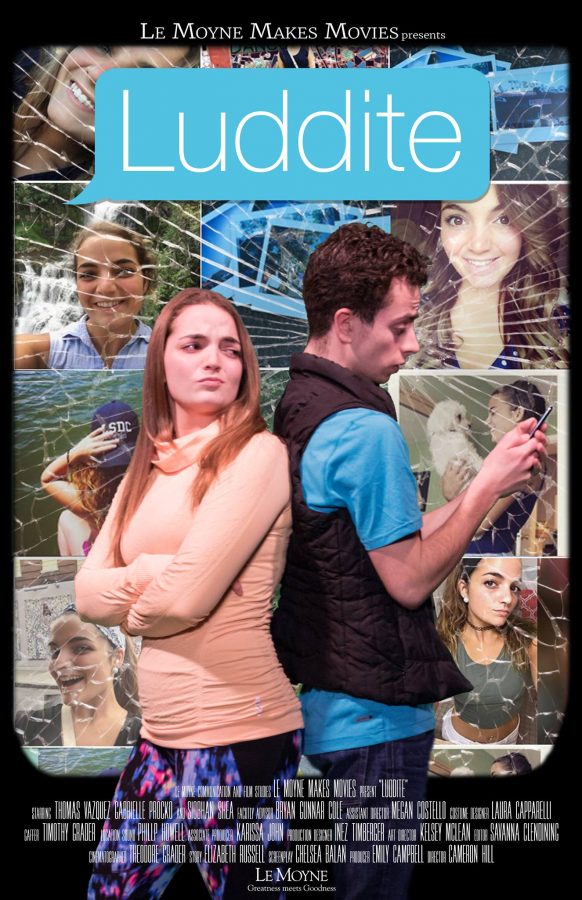 The new student film Luddite is set to premiere Wednesday, April 26 at the Palace Theater on James Street. Luddite is a short film (less than 60 minutes) produced through the Le Moyne Makes Movies program, in which students act in, shoot, produce, and edit the film. The program allows students to oversee every single aspect of the project and complete a film that is truly their own.

In just half a year since pre-production began, the film is in post-production; it’s being edited with all the finishing touches to satisfy Hill. Students received credit hours in the fall semester by taking CMM 435 but in the spring semester students volunteered their own time on top of their class schedule. The trailer will be available on the Facebook event page “Luddite Premiere” and will be shown on screens in the Den and Campus Center. Luddite’s Facebook page also displays updates and describes the film being about how “the growth of social media and technology has affected how we interact with each other.” In short, it’s relatable and modern.

Doors open at the Palace Theater at 7 p.m. to a red carpet reception. The film, which is free, will show around 7:30 p.m. with a Q&A session to follow, giving the audience a chance to speak with the students.

The film is being advertised throughout the community in hopes for a big turnout. The Le Moyne Makes Movies program has seen significant improvement since its first project, Business Affairs, in the Spring of 2015. As such, the whole cast and crew are hoping that the momentum will continue and in advertising for the film they’re advertising for the program as a whole. Hill says that there is a definite potential for growth considering the experience the students have gained and the interest in this film and the previous one.

Le Moyne Makes Movies is a great opportunity for students to work hands-on with a collaborative effort in learning on the job. The work that’s accomplished in the program can be put on resumés and portfolios to launch a career. The future may hold a feature-length film for Le Moyne Makes Movies or completing multiple short films at a time.

The premiere is a chance to support fellow students and as Director Hill says, “Who doesn’t like going to the movies?” It’s an entertaining way to see the work of the Communication and Film Studies students and to take pride in the quality projects that our school presents.

If the community takes enough interest in this contemporary address, there may be more showings of Luddite. If Dolphy Day happens to be April 26, the show must go on. Stay tuned on the “Luddite Premiere” Facebook page for updates.