The Best ’90s Cartoons on Nickelodeon 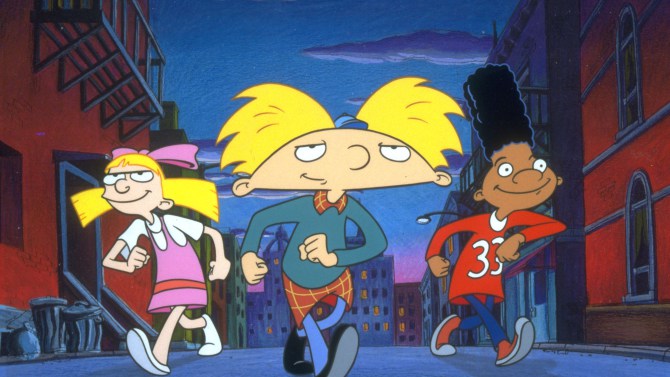 Without question, the ‘90s was the decade that generated some of the best kids’ shows. But, alas, all good things must come to an end…and now the younger generations will never understand the pure joy of watching All That or Even Stevens. To remind you of just how great the ‘90s were––although we were barely lived it––here’s a little throwback Thursday to reminisce on your childhood memories.

These were the coolest group of toddlers, way smarter than any kid I’ve come across. Rugrats focused on the daily adventures of Tommy, Chuckie, Angelica and the twins Phil and Lil. It was the second Nicktoon to air after Doug premiered on August 11, 1991. From 1995 to 1996 there were only two new episodes broadcasted, “A Rugrats Passover” and “A Rugrats Chanukah.”

Soon after these episodes were released, the show began to see a boost in ratings and popularity. As a result, a series of films were released: The Rugrats Movie, which introduces Tommy’s baby brother, Dil; Rugrats in Paris: The Movie, where we learn about Kimi and Kara; and Rugrats Go Wild, which was a crossover film with the Nickelodeon show, The Wild Thornberrys.

In honor of the show’s 10th anniversary, Nickelodeon released a spin-off series, All Grown Up. This series showed audiences the lives of the rugrats, and their parents, 10 years later. After a 13-year run, Rugrats gained over 20 awards and was named the network’s top-rated show from 1995 to 2000.

Rocket Power was created by Arlene Klasky and Gabor Csupo, the creators of Rugrats. The series ran on Nickelodeon for four seasons from1999 to 2004. The title refers to the brother-sister duo of Otto and Reggie Rocket, along with Otto’s friend Maurice (“Twister”) and the new kid, Sam (“Squid”).

The show involves the four main characters doing extreme sports, such as skateboarding, biking and rollerblading in every episode. Over the course of the series, we learn about Madtown, the local skateboard park where the friends hangout, and other important characters of the show like Otto and Reggie’s dad, Ray. He’s the owner of a restaurant, with his partner Tito, on the Ocean Shores Pier. Ray and Tito are always around to remind everyone that cool friendships are way more important than anything else.

You never saw a boy with such an oddly shaped head until you watched Hey Arnold! The show stars fourth grader Arnold, who lives with his grandparents Phil and Gertrude, in the fictional city of Hillwood. In each episode, he often helps a schoolmate or a neighbor solve a personal problem. When Arnold isn’t trying to help people with their personal issues, he’s either hanging out with his best friend Gerald or being bullied by Helga, because she’s in love with him.

If you were a fan of Hey Arnold! you’ll be happy to hear there’s a sequel to the 2002 movie coming out called, Hey Arnold!: The Jungle Movie. The television film will answer any unsolved questions you had/have and will be shown on Nickelodeon this November.

This show features the Australian-immigrant wallaby named Rocko, as well as his friends, Heffer Wolfe, Filburt and his dog, Spunky. The plot consists of Rocko’s day-to-day life, surviving the torment of his next door neighbor, Mr. Bighead and his boring job at a local comic book store run by the angry Mr. Smitty.

According to The Verge, Rocko’s Modern Life will be heading back to Nickelodeon for a one-hour special this year, “What I have found by bringing these characters back is that it’s not so much about nostalgia, but a sense that they still feel relevant and fresh to me, and after twenty years, they can’t wait to comment on modern life in the 21st century. They still have a lot to say,” said creator Joe Murray.