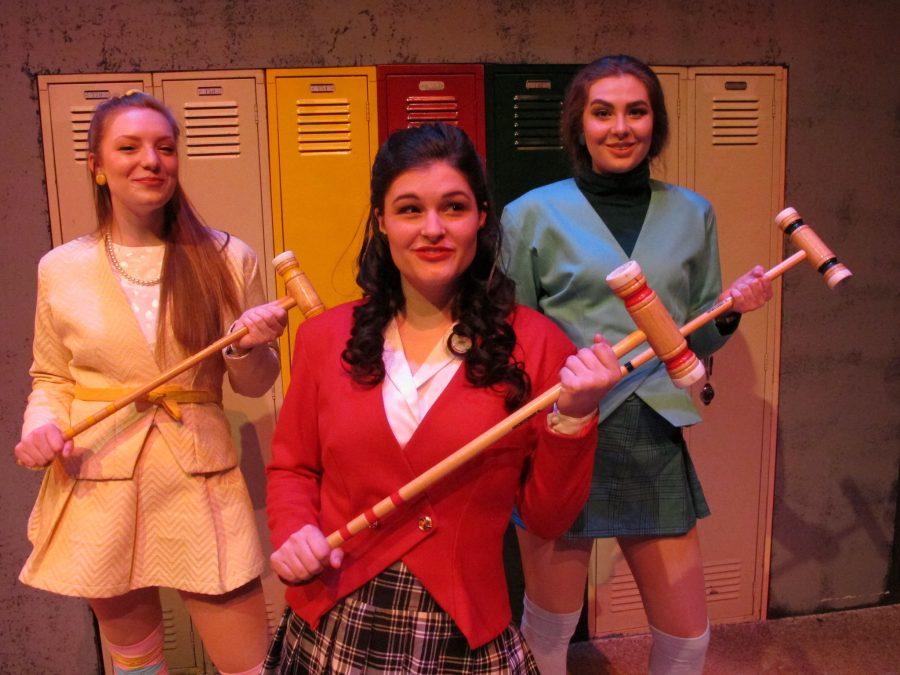 It starts out as the archetypal high school experience: the pretty, rich girls are on the top of the food chain and they feed on the sensitivity of smart, nerdy girls; dumb jocks make crude jokes and care really hard about getting laid; and parties with kegs and lots of unnecessary teenage drama go on while the parents are away. Then love magically becomes God and things get weird.

“Heathers” is the latest musical installment at The PAC, put on by Le Moyne’s Visual and Performing Arts Department and Boot & Buskin Theatre Club. The show opened last Friday night to a packed theater and the audience was left to revel in some “big fun.” That’s if you consider a raw, chaotic, guilty-pleasure musical that turns a bunch of Ohio high school seniors into sitting ducks waiting to getting hunted down “big fun.”

Originally written by Kevin Murphy and Laurence O’Keefe, and directed by Amy Fritsche for Le Moyne, “Heathers” is based on Daniel Waters’s screenplay for the 1988 Michael Lehmann movie. The film disappointed at the box office but has since become a classic ‘80s cult movie. Starring a young Winona Ryder and Christian Slater, “Heathers” was the original mean girls that set the stage for the actual Mean Girls to have such success.

The film gave audiences a beautiful, mysterious heartthrob with an act for guns and explosives. He specializes in exterminating snobby kids, and before school shootings like Columbine and an increasing awareness of bullying and suicide, a plot about killing high school villains seemed relatively innocent.

That sick joke has become even sicker with “Heathers: The Musical.” There’s nothing quite like adding bubbly music to a dark story to increase the movie’s twistedness and make viewers question their morality. Those feelings of conflict were carried out in Saturday night’s audience, who oftentimes stopped themselves mid laugh when they realized they were cracking up at a joke about suicide or bobbing along to a song about date rape.

The three title characters of “Heathers” (played with cheer and scorn by Noelle Killius ‘18, Meara Mosny ‘17, and Jade Miori ‘18) rule the halls of Westerburg High with unwavering cattiness in ridiculously short, short skirts. Along with their moronic male counterparts (played perfectly by Michael O’Sullivan ‘19 and Kilian Crowley ‘16), they ridicule and strike fear into the hearts of their less aesthetically appealing classmates using labels customarily frowned upon when used in public.

The destruction of these dictators is secured when they recruit the nerdy Veronica Sawyer (a witty Morgan Smith ‘19) into their clique after giving her a “Clueless” worthy makeover. It’s clear from Veronica’s diary entries and her musical numbers, which Smith performs enchantingly with her awkward dance moves and powerhouse vocals (though I think her voice sounds most beautiful on the softer notes), she’s conflicted about her new social status. So she’s fitting to be seduced by the school’s trenchcoat kid, J.D. Dean (the impressive Alex Leblond ‘18), who can’t stand the high school hierarchy and very well just might be an actual psychopath. No, I take that back. He is a psychopath, a very suave one.

The first act of “Heathers” starts out masterfully chaotic, with its uncensored jokes, bouncy choreography, and lewd introductions. It seamlessly sets up the high school division between the cool and the lame. Musical Director Greg Giovanini did a wonderful job bringing the musical bubbliness, sassiness, and emoness to the stage. Eventually it gets a little more serious after some “deaths” occur, but even those provide ample sources of comedy.

The second act mostly consists of Veronica trying to clean up the mess she helped create as she comes to the realization that her well-read lover is insanely crazy and may have a god complex. The production was enjoyable, but I have to admit, it could have been even more enjoyable if it was tad shorter. Even so, “Heathers” was perfect in its raunchiness, vulgarity, satire, and its performers. Smith was wonderful, but going into the performance after hearing rave reviews, I had the expectation she would be nothing less. It was Leblond who unexpectedly stole the show for me, with his intense stare, perfectly in tune serenade to his slurpee and 7/11, and the way he shivered when talking about his next kill. The kid knows how to play a good psychopath, let me tell you.

Everything is funny and uncomfortable, big enough to the point where you just have to sit there and take it; to let yourself laugh without the guilt. Or as Veronica might say, “Lick it up, baby. Lick it up.”