There’s no need for a prince when you’re Moana: Review 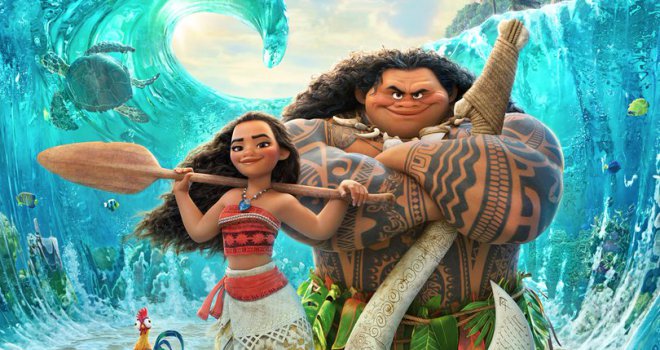 Disney’s newest princess film, Moana, is sure to be an instant classic. It amazed me with a beautiful story, excellent characters, and a glorious soundtrack. I went into this movie with fairly low expectations and was absolutely astounded.

Moana is a story about a village chief’s daughter who sets out to sea to save her South Pacific island along with the goddess of life, Te Fiti, from destruction by an evil, parasitic force. Moana seeks the help of reluctant Maui, the demi-god who is the one person who can help her to right his ancient wrong. They journey past the horizon into different realms, fighting giant crustaceans and little coconut people, ultimately facing off with the dreaded lava monster. The characters, setting, and myths were based on Hawaiian and Polynesian culture.

The film features a high-profile cast, introducing Auli’i Cravalho as Moana and starring Dwayne “The Rock” Johnson as Maui. Their rapport is natural, easy, and fun to watch. Cravalho’s singing voice is strong and clear, and perfectly encapsulates the emotions behind the lyrics. Johnson surprises us with a pleasant and jovial voice featured in Maui’s sarcastically charming song.

The soundtrack is a masterful creation of Lin-Manuel Miranda, who orchestrated the Broadway musical Hamilton. With such an auspicious history, Miranda proved himself to be worthy of the musical accompaniment to a Disney princess film. Every song adds something to the plot, along with pure audio perfection. The lyrics are melancholy, nostalgic, inspirational, and above all, moving.

The movie does of course feature many token “Disney” moments, such as the death of a family member, an idiotic but likeable animal sidekick, and Disney easter eggs. There were four that I counted, in the form of Sven from Frozen, a quote from Aladdin in the song “Shiny,” the magic flower from Tangled, and a hilarious reference to another Disney movie at the very end after all the credits. It’s worth the wait to have a good laugh.

At the end of their quest, Moana and Maui find Te Fiti and are able to also find themselves. Moana is truly a story of self-discovery, and finding strength from within. It is another “anti-princess” Disney princess movie, showcasing an independent young woman as not only the future of her village, but also as the heroine of the entire story. She doesn’t have a love-interest at all––something pretty new to the Disney princess realm–– and manages to save herself and Maui on multiple occasions, demonstrating that inner strength can be just as valuable as physical strength. She uses her wits and resourcefulness to get her out of several predicaments, all the while learning about life off her island. She’s not content to sit around and let events unfurl around her; she realizes she has to set them into motion to make change and save her island and family.

There is also an underlying eco-friendly message throughout the movie, but present enough from beginning to end. Moana and her village live on an island and therefore depend on the limited resources that the small environment can afford. The dark parasitic presence that Moana sets out to combat is an allegory for pollution, and Moana stresses the value of nature and preservation by restorying life and balance.

Whether you are a Disnerd or just an average movie-goer, I would absolutely recommend seeing Moana. It’s not just a kid’s movie. The themes of family, friendship, and perseverance appeal to all age groups. The animation is visually stunning, the songs are beautiful, and the story will sweep you away on the tide of adventure.

Four out of four dolphins.