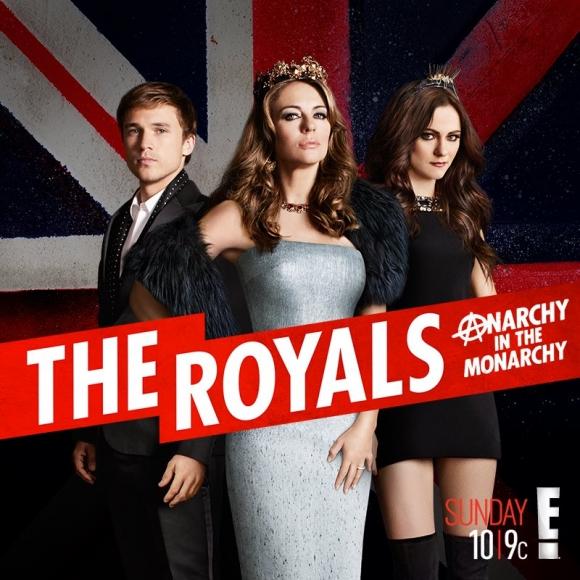 The E! network’s first scripted TV show titled The Royals has proven once again that the network can produce some seriously addicting shows (Kardashians…I’m looking at you).

Featuring actress Elizabeth Hurley as the sassy Queen of England, Chronicles of Narnia alum William Moseley (all grown up and super attractive) as Prince Liam, and newcomer Alexandra Park as the mischievous Princess Eleanor. The Royals  started out with a bang; killer music in every episode, gorgeous English scenery (including the fancy shmancy walls of the fake royal castle), overly attractive foreign men, and a plot line filled with holes and gaps only to be filled week by week as scandals grow deeper.

Every Sunday night at 10 pm I can’t wait to see what drugs Princess Eleanor takes, how many evil eyes are given by the Queen when she wants to slap the living daylight out of one of her children, and how many times we see the ever charming Prince Liam cheering in a rambunctious youthful pub. Not to mention how many boring serious talks are given by King Simon, played by actor Vincent Regan (300, Snow White & the Huntsman…)

You get the jist of it, two rebellious royal children under the overly watchful eye of their demeaning and selfish mother who only cares about tabloid headlines and whose Twitter feed she needs to censor. But the story lines dive deeper than just that. The series premiere left viewers wondering, how did the brother die? We never got to see him or know what he was like, which leaves many people wondering what really caused his death. The brooding Uncle Cyrus’ motives grow increasingly suspicious as the weeks go on (He’s already tried killing the King…twice.) We also recently learned that the Queen is involved with another man. What about Princess Eleanor’s professional, model-like “bodyguard”? (yeah, I’m still confused about that one…) As for the commoners living under the royal roof, actress Merritt Patterson plays the always pouty Ophelia, living with her lonely workaholic father who works for King Simon. Ophelia’s character is intriguing because of the fact that she is NOT a royal, but is living in a massive castle devoted to royal people. Oh yeah, and she slept with Prince Liam…

While reading reviews on The Royals (most are bad…extremely bad; “E’s The Royals is Awful/Wonderful To The Kardashianth Degree”, “E!’s first scripted show a royal failure”), you can’t help but wonder if William and Kate are sitting in their golden posh living room with a warm bowl of buttery popcorn every Sunday night to see what trouble the fake royals are up to this time.

I think this show will last, because E! has great publicity for it, the show’s brand is scandalous and enticing, it follows America’s infatuation with English Royalty, and there’s an overflowing amount of attractive people in the cast. There’s no way it won’t last.